When Tim Haus presses the pedal down, his car leaps forward.

It’s a 2012 Chevy Volt and although neck straining acceleration isn’t the main reason he bought the car it is an interesting side effect of a vehicle that is powered by electricity.  It has 273 lb-ft of torque.

“This gets 56 kilometers on electricity only, which is enough for most commutes. Most people, if they analyze their commute, they will be under 56 kilometers,” said Haus. 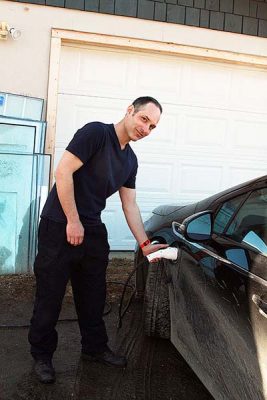 The car comes with an onboard gas powered generator, so being stranded on long hauls is not a problem. For Haus, it’s the perfect car.

Haus said it cost 30% more than a typical sedan but the cost of running it is 10 times less the price of fossil fuel.

Haus said the car will pay for the difference in price (the 30% premium) in two years.

A trip into town used to cost him about $6 in fuel. Now it’s down to 50 cents of electricity.

Haus charges the car at a friend’s house while he is in town. His family lives off the grid in a solar powered home, so charging at home is not an option.

The car has 100,000 km on it, and sports leather seats, Bose sound and a navigation system.

The car’s instrumentation keeps track of battery use and, because it uses fuel as a back up, also keeps track of mileage. It shows that over its lifetime of 100,000 km the car averaged 200 miles per gallon. That’s on average 1.18 litres per 100 km.

Unlike most cars that stop the car by turning kinetic energy into heat when using the brakes, Haus’ new ride, turns that energy back into electricity.

“It’s called regenerative braking, when you go down a steep hill, it will recharge your battery,” he said.

According to many online accounts the Chevy Volt is well suited to winter life with the addition of good winter tires.

“The traction control has the ultimate drivetrain to control, no messy engine or transmission to interfere, just limit power output and control slip with the ABS,” according to a 2013 Volt owner.

Haus hopes to see widespread adoption of electric cars, because of their reduced impact on the environment.

“You suddenly feel part of the future instead of the past. And it’s a really good feeling,” he said

“We do not seem to realize that we need to change our habits in terms of transportation. We get messages from all over the world that something is right about using fossil fuel,” he said. “We use transportation to drive around all day simply to enjoy ourselves. That was okay for a long time, but humanity’s parameters have changed. You have to adapt to the parameters.”

He’s excited about vehicles like the Nissan Leaf that has a longer range and quicker charge time.

“You can go between 100 and 150 kilometers per charge. That means you can go from here to Valemount, charge it in half an hour while you have a coffee or go shopping or go on the bike trails and come back,” he said.