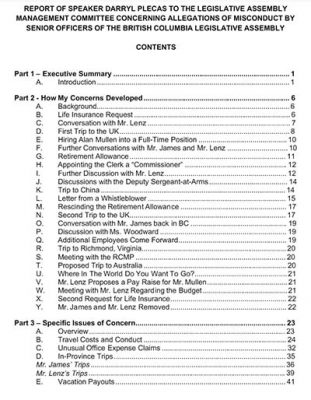 When Speaker of the House of British Columbia’s Legislative Assembly Darryl Plecas decided it was time to blow the whistle, he blew it loud and clear.

“In the months after I became Speaker, I learned of a number of allegations, and personally observed or was party to numerous conversations or activities, which made me deeply uncomfortable with the conduct of the Clerk of the Legislative Assembly and the Sergeant-at-Arms, and with the impact it has had on the functioning and culture of the Legislative Assembly more generally,” wrote Plecas in a brief introduction to his 76 page document outlining his concerns. The document is long but it reads like a thriller.

You’ve likely already heard of some of the wild accusations leveled at legislative clerk Craig James and Sergeant-at-Arms Gary Lenz, including the purchase of a wood splitter and trailer that was later found at James’ personal cabin, a truck load of liquor valued at $10,000 leaving the legislature in James’ private vehicle.

If you haven’t read the report, it’s worthwhile and full of amusing subheads and detailed notes from meetings with the two officers.

One section entitled “Where In The World Do You Want To Go?” is Plecas’ account of a meeting where Lenz showed up with a  2019 calendar and had written a number of different options identified as a possible ‘business trips.’

“He suggested Ottawa, Florida and Ireland, in addition to our other travel. The message was implicit, but obvious, that we would determine later how to justify the locations we selected as a business purpose,” wrote Plecas in his report.

Perhaps the most amusing account is how Lenz proposed a pay raise for Alan Mullen, the man who ultimately conducted the investigation into Lenz and James. The pay raise was partly justified by all the travelling Mullen would be doing.

Plecas said that he was concerned with conduct of the clerk and Sergeant-at-Arms as well as the functioning and culture of the Legislative Assembly as a workplace.

In Plecas’ words, James and Clerk were engaged in luxurious trips overseas with questionable business rationales; expensed personal purchases to the Legislative Assembly, and gave inappropriate payouts in lieu of vacation, which appear to total in the hundreds of thousands of dollars. There was also a lack of oversight in the awarding of employment benefits, evidence of attempts to obtain highly questionable further benefits, liabilities that would have cost the Legislative Assembly millions of dollars; using working time to make day or overnight trips away from the Legislative Assembly, at the Assembly’s expense, for non-legitimate work purposes; instances where thousands of dollars of alcohol and equipment may have been misappropriated from the Legislative Assembly; various concerns relating to management of employees, including potentially retributive or unjustified terminations; and taking steps to conceal information which could indicate improperly claimed expenditures.

While conducting his investigation, the Speaker of the House came under heavy fire from the opposition Liberal MLAs and that included flak from Prince George – Valemount MLA Shirley Bond.

“The Speaker has outlined some very serious allegations in his recent report,” Bond told the Goat in an email Monday morning. “There are a number of processes underway to deal with the report and I am not going to comment on the specific allegations it contains. Having said that, British Columbians need to be able to have confidence in their Legislature and while some efforts have been made over time, there is clearly more that must be done.”

The Sergeant-at-Arms is also a permanent officer of the House who is responsible for the security of the Parliament Buildings and legislative grounds to ensure the House, its committees, and Members are able to conduct their business without disturbance or interruption.

Both positions are supposed to be nonpartisan, but the issue is tearing along partisan lines, as both Lenz and James were appointed during the reign of the Liberal government.