A recent survey revealed most British Columbians want to end heckling during Question Period, and if the first week of the 2021 legislative session is any indication, the Speaker is no fan either.

The session began with two days of restrained civility, led by Interim Opposition Leader Shirley Bond and Premier John Horgan as they parried through each day’s Question Period openers.

The wheels flew off the bus on day three, Mar. 3, when a stream of heckling, desk banging, and insults throughout Question Period caused Speaker Raj Chouhan to issue a rare admonishment to MLAs in the Chamber afterwards.

“Members, you may think that making a big noise is a good way of doing Question Period. The Chair doesn’t appreciate it,” he said.

Chouhan, the NDP MLA for Burnaby-Edmonds since 2005, was appointed Speaker last December after serving as Deputy Speaker since 2017.

“So?!” fired back a member of the Liberal caucus.

“So, the point is… let’s be temperate in our language in our debate, because the public is watching,” Chouhan said. “Opposition members have every right to ask questions. I understand their passion and all that, but be careful. Be careful.”

His comments followed a 32-minute long Question Period in which ‘incompetent’ or its derivative was used in every question asked by a Liberal member and in one response by a government minister, for an average of once every two minutes.

By the time the last questioner, Liberal House Leader and Kamloops-North Thompson MLA Peter Milobar, unleashed a string of insults and the Premier forcefully responded, the Chamber reverberated with shouts of support and heckling on both sides of the aisle.

A far cry from the previous day’s Question Period, which Horgan had hailed for its “respectful dialogue”

and he’d wrapped up with a team-building, all-party unity message about how progress could be made on the opioid crisis if everyone took responsibility and worked together.

According to recent survey results, most British Columbian want their legislators to work together, and heckling, a long-held acceptable partisan behaviour in the political theatre known as Question Period, no longer enjoys popular public support.

“Desk banging, heckling, a majority of people say, we don’t want to see this happening,” said Mario Canseco, president of Research Co., a Canadian public opinion polling and research company. “The appetite’s not there.”

Research Co recently polled 800 British Columbians for their opinion on heckling, desk banging, reform of parliamentary decorum, and several other recommendations made by former Speaker Darryl Plecas in his final report to the B.C. Legislative Assembly entitled, Speaker’s Forum on the Role of Members: Actioning Proposals for Change.

Aimed at legislative reform, the Plecas report made dozens of recommendations including the formation of an all-party committee to consider how to discipline unacceptable behaviour in the Chamber and whether to eliminate heckling, desk banging, clapping and interruptions during Question Period.

“Improving decorum during proceedings of the Legislative Assembly has been a hallmark of my tenure as Speaker,” wrote Plecas in his December 2020 report. 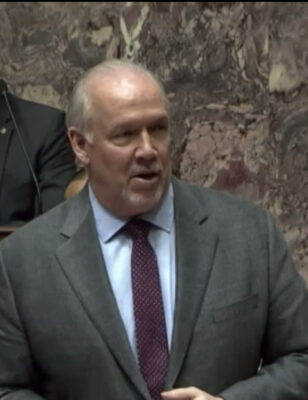 In the Research Co survey, 57 per cent of British Columbians thought an all-party committee to examine parliamentary decorum was a good idea. Of the BC Green supporters who responded, 57 per cent were in favour, while 62 per cent of NDP voters and 66 per cent of Liberals were supportive.

“Ultimately, this is about figuring out a way to discuss policies that is not going to be drowned by clapping or heckling,” said Canseco.

It’s unclear whether the government would consider these reforms, but bringing about change could begin with the Speaker establishing rules with the house leaders, said Canseco, likening it to when a judge speaks privately with the defence and prosecution lawyers to curb courtroom overacting.

“Where the Speaker discusses this with the house leaders pre-emptively and says, ‘This is the way it’s going to go from now on, so please advise your sides,’” Canseco said.

“But it’s definitely something that people want,” said Canseco. “People want to see some sort of decorum back in the legislature.”