As Brent Beallie peers through the rubble of his burnt out house he spots still recognizable remnants.

“There’s my brand new stove, table saw… all my tools are gone. A brand new portable garage in the box,” he said.

He’s finding the good china, the Christmas dishes, a new sink and bathtub burned in their boxes.

A lawnmower 20 feet from the house is charred, sitting on its rims as the fire burned the tires off from under it.

Beallie has already filed a claim with insurance over contents, but he sees many things he had forgotten to claim.

“Holy crap, man,” he exclaims, as he looks over charred keepsakes and tools. “I haven’t had a really close look at this.”

He picks through mangled chainsaws, holesaws, a motorcycle jack stand.

Beallie credits his neighbour Bruce for wheeling his Harley Davidson out of harm’s way.

Bruce saw the fire and came over to let the dogs out, affectionately known as Riff and Raff. They were with Beallie at the time.

Losing a home to fire is a traumatic event, but because Beallie’s home used to be the beating heart of the Tete Jaune community, that has made a tough situation harder.

Neighbours old and new mourned the loss of the building that once housed the old Tete Jaune Store. When this newspaper initially framed the loss of his house as a story about the loss of a historic building, it irked Beallie.

“All these people were almost heartbroken about the whole thing,” said Beallie. “To me I had worked on this place for 18 years.”

“I jacked all the walls up, changed all the joists, but the floor back down. I did so much work here,” he said.

Beallie had planned to reopen the store, which was connected to his house, in the coming season.

“We were just about to put the new kitchen in the house, my RV park would have been open by next spring.”

Beallie had planned to have pipeliners stay there.

Currently he is struggling with the insurance company.

The house held good memories for Beallie, whose daughter Taylor grew up there.

At the time his young daughter would run laps around the house, he recalled her making 78 laps at a time and figured she must have been close to running a mile.

Beallie said a 10- day trip away helped him refocus and relax.

Thinking about the loss, what it meant and what is next, he recalled a sign his daughter made when she was young.

“She made a big sign that said, ‘Don’t look back, you’re not going that way.’”

Beallie says he plans to sell the property. For the interim he’s staying in his 5th wheel. He plans to stay in Vernon over the winter. 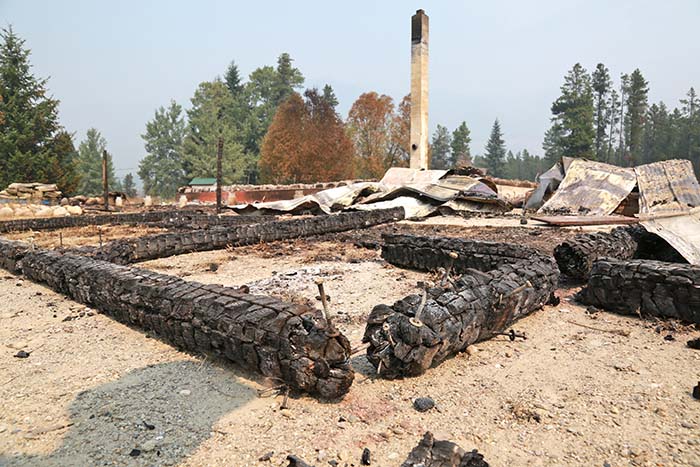