by Andru McCracken – with files from Dr. Tony Phillips of Spaceweather.com 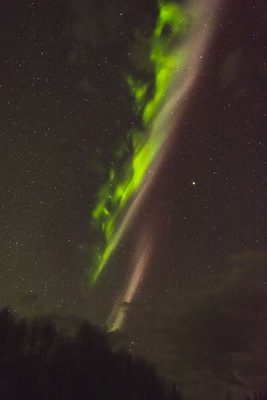 There’s nothing new or particularly rare about STEVE, according to spaceweather.com, but it’s only recently been classified by astronomers thanks to the hundreds of thousands of amateur astronomers with the ability to record images of the heavens at night.

McBride photographer and skywatcher Matthew Wheeler is one of those astronomers and his recent photographs and accompanying time lapse video of STEVE has made the landing page of spaceweather.com.

While it shares some characteristics with northern lights, STEVE is different, according to spaceweather.com author Dr. Tony Phillips. He said STEVE is an acronym for Strong Thermal Emission Velocity Enhancement.

“Researchers are only beginning to understand the phenomenon — aided by a chance encounter between STEVE and a European satellite. In situ measurements suggest that STEVE is the afterglow of a hot ribbon of gas that flows through Earth’s magnetosphere during some geomagnetic storms,” writes Phillips on his space blog.

Another photo, this one from the prairies, shows STEVE stretching from horizon to horizon.

“My dog barked at STEVE for the entire hour it was visible,” reports Wheeler. “We spotted the ribbon just after midnight, and even without dark-adapted eyes it was easy to see the textures moving at astonishing speed.”

Wheeler also captured photo and video of STEVE looking straight up, showing a beautiful interaction between the purple ribbon and nearby green “picket fence” auroras.

“The purple ribbon was moving much faster than the green pickets,” says Wheeler. “And while their forms varied from smooth to ragged and back again, their path across the sky was almost constant for the whole hour.”

Wheeler first noticed STEVE over the Robson valley in the 1980s. Wheeler said his late friend Robert Frear noticed STEVE while driving to Lamming Mills in 1962.

But despite STEVE being around for a long time, Phillips said much about the celestial phenomenon is still a mystery.

“Researchers still don’t understand why STEVE is purple, nor can they predict which geomagnetic storms will lure the arc out of hiding. Recent research suggests that STEVE loves equinoxes. The arc is seen most often during spring and fall.”

That means now is the season for STEVE, he says, and more sightings are possible in the nights ahead as the solar wind continues to blow.