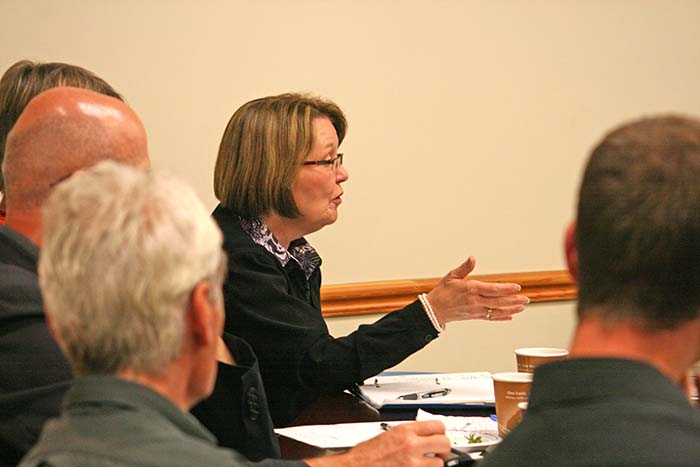 MLA Shirley Bond, co-finance critic for the Liberal Party is not happy with the NDP’s budget, announced on February 20. She said the amount of new taxation caught her off guard.

“The biggest surprise is the degree of taxation layered into this budget,” said Bond.

She said her party had also planned to eliminate the Medical Service Premiums, like the NDP have.

“We said we’d eliminate [premiums] when we could afford to pay for it,” she said.

Bond said that a new employer payroll tax on businesses with more than 50 employees to make up the difference is a bad move that will hurt the economy.

There are also increases planned for the carbon tax.

She said the budget reflects big spending and big taxation at a time when resource industries are struggling.

“We see declining revenue for forestry, mining and oil and gas. Those are the core resource based industries that in many ways drive the economy,” she said.

She said while the US is working on lowering taxes, these changes make British Columbia much less attractive.

Bond allowed that new investments in childcare and housing is important to British Columbians, and people living in the Robson Valley, but she wonders whether the programs will really benefit local people.

Childcare a new program makes care free for some low-income families. It also offers subsidies for families who make more based on income. The promised $10 a day child care election promise is not mentioned.

The foreign buyer tax increases from 15 per cent to 20 per cent, and expands to Kamloops, Kelowna, Greater Victoria and the Fraser Valley.

They plan to create 33,700 affordable housing unit pegged at $6.2 billion overthe next 10 years

There is a new two per cent speculation tax for people who don’t pay income tax in B.C. & the province plans to better police fraud and tax evasion in housing.

Tobacco taxes are going up, and so are taxes on luxury vehicles valued more than $150,000.

/AS REPORTED IN THE VANCOUVER SUN

“There are investments being made in programs like childcare and housing. How will that be felt in rural areas?” she asked. “I have no idea whether there will be a direct benefit to my constituents.”

Bond said a major plank in the NDP’s election platform, a universal daycare program, is non-existent.

“They should not have told British Columbians that they would implement a $10 a day daycare,” she said.

She also criticized their promise to create 114,000 new housing units which has been reduced to 33,000.

And there is no renters rebates, she pointed out.

“I commended their support for families that are vulnerable,” she said. “If you make $45,000 or less you will find additional support, but a major plank in their platform was a universal daycare program. That is not even within sight.”

She said it’s her job to look at what was said and what has been delivered.

“The fiscal plan is wholly dependent upon a growing economy. However, this plan has no measures to grow the economy.”

“If all of this sounds vaguely familiar, it’s because we’ve heard this story before,” notes Bond. “Welcome back to the NDP of the 1990s and remember, the sequel is always worse.”