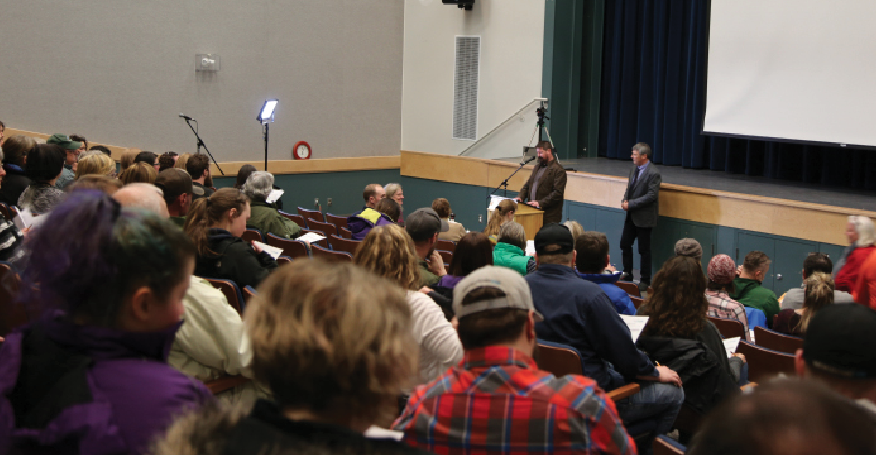 This year twelve projects worth $232,516 vied for $250,000 in grant funding and about 50 people showed up to the community theatre in the high school auditorium to rate projects pitched by the community organizations. The funding is provided by the Columbia Basin Trust Community Initiatives

The Valemount and Area Recreation Development Association pitched a phase four of their bike park. The project requested $15,000, about a tenth of the total value of the money they need for the project. Pawliuk said they had already secured some funding from other sources. Phase four will develop more runs for beginner and intermediate bicyclists, as well as an adaptive trail, one of the few in British Columbia that will be designed for recumbent handcycles, gravity quad bikes and recumbent trikes.

The Yellowhead Outdoor Recreation Association asked for $20,000 to create a plan for the recreation site at the top of Five Mile, including campsites, the possibility of a viewing tower and an upgrade outhouse.

The Robson Valley Spay and Neuter Society sought funding for half the costs of spaying and neutering 24 cats and 5 dogs (costs shared with owner) as well as 14 stray cats.

The Valemount Children’s Activity Society applied for $19,650 to rejuvenate its playground. The society runs Valemount’s only licensed daycare and preschool.

The Royal Canadian Legion Branch 266 sought funding to replace their stove, some hall equipment and chairs.

The Valemount Senior Citizen’s Association applied for $7,770 for the Circle of Security Parenting Program.

Valemount Affordable Rentals Society applied for $59,280 to hire a contract manager to complete phase one of a student housing project. $15,000 would go towards hiring a development consultant to develop a suitable plan for new affordable housing on an adjacent lot. $32,780 would go to hire a manager and set up an office to run the day to day operation of the society which will eventually be sustained through income.

The Canoe Valley Community Association sought $8,627 for a variety of upgrades to comply with childcare licensing requirements. The group plans to run an after school program.

The Robson Valley Support Society applied for a community coordinator for volunteers in the amount of $36,164. The society said it would help sustain important annual events like Valemountain Days. 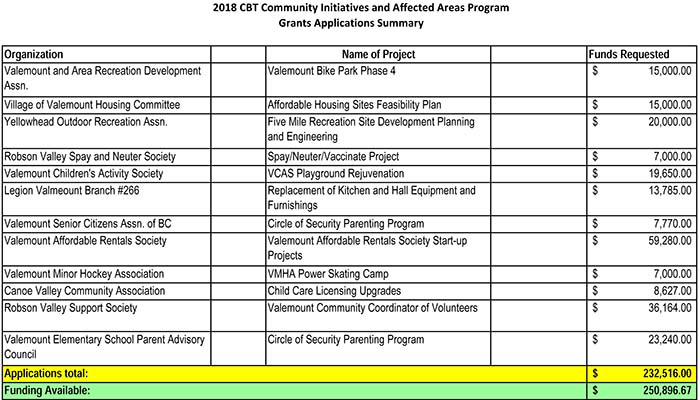