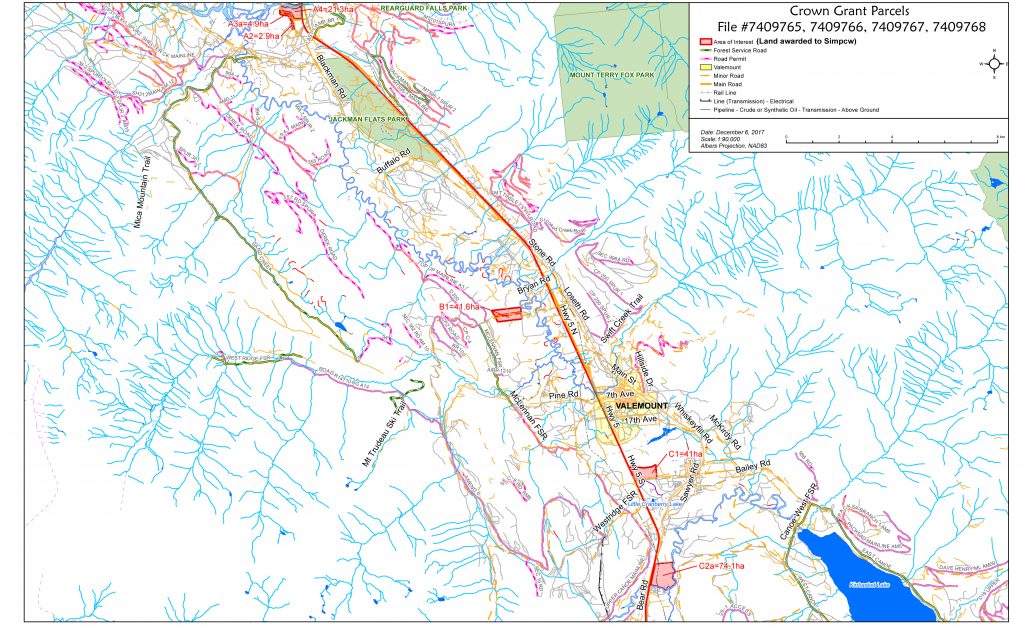 The Province has transferred 185 hectares of Crown land to the Simpcw First Nation, parcels in Tete Jaune Cache and close to Valemount. The Minister of Forests, Doug Donaldson, said it is part of an accomodation for the Valemount Glacier Destinations resort approval.

“We’re pleased to support Simpcw First Nation in re-establishing their presence in this part of their territory,” Donaldson said. “This land transfer is an exciting opportunity for the Simpcw to participate in the economic diversification of Robson Valley.”

Simpcw Chief Nathan Matthew said the Simpcw First Nation has been involved in the planning of Valemount Glacier Resort from the outset and they look forward to its development.

“We’ll have a little bit stronger interest in economic planning for the area,” he said. “The significant inclusion of our community in this project is a step toward reconciling the challenging history we have in the area.”

According to Celia Nord, an archivist for the Simpcw First Nation, the government forced the indigenous residents of Tete Jaune Cache to move to Chu Chua (near Barriere) in 1916. An historic map created by the government in 1905 showed a reserve was once considered in the Valemount area.

The land parcels being transferred to the Simpcw include a historical village site on the banks of the Fraser River, as well as hunting and fishing camps.

The four pieces of land include a 74.1 hectare parcel south of the Canoe River Campground which was recently logged in part; a 41 hectare parcel south of Cranberry Marsh that has been recently logged; a 41.6 hectare piece of land on either side of McLennan Road en route to the airport that has been logged; and an area totalling 29.1 hectares between Highway 5 and Blackman Road (including a thin strip of land on the west side of Blackman Road).

Matthew said the negotiations with the province were fair, but there wasn’t much Crown land to choose from.

“There weren’t that many pieces available. You look for something close to the highway, relatively level that hasn’t been polluted in the past,” he said.

The new land is owned fee-simple and doesn’t constitute a reserve; the pieces fall under the same rules for development as neighbouring pieces of property. The land is currently zoned Agricultural Resource.

Matthew said they don’t have specific plans for any of the parcels.

“We just wanted to get through the land selection with the land that seemed to be in reasonable location relative to significant areas traditionally,” he said.

Valemount Glacier Destinations is a planned ski and sightseeing resort that encompasses 4,997 hectares in the Premier range of the Cariboo Mountains. The resort’s Master Plan was approved in August 2016, and the Master Development Agreement was signed in March 2017. As part of the Master Development Agreement, accommodation for the Simpcw First Nation included revenue sharing and the transfer of land.

Bob Griffin owns the Canoe River Campground and has been looking to purchase the property directly south of him from the Crown since 1969 and has made  five applications. He’s not happy that it’s been transferred to the Simpcw First Nation.

“My mom and dad were here just before the war. Mom homesteaded the first piece of property here; she put in their name they started getting quarters they started out with 5 acres and kept going,” said Griffin who will be 70 years old next year.

“I’m just wild about it,” said Griffin. “I mean ballistic. Every one of our applications was denied.”

When asked what the land transfer would mean locally, Matthew said they will be really good neighbours that develop some of the land in a positive fashion.

“We have strong values, environmental protection and enhancement. We’re not going to pollute anything.”