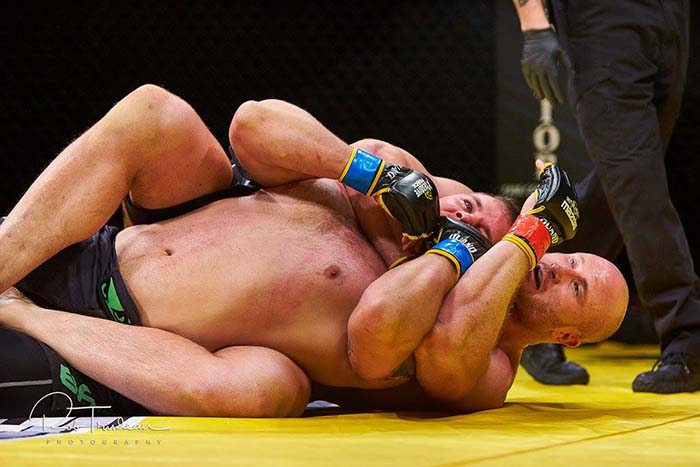 “It felt like a very long time coming,” said Francotti. “We planned on going pro three years ago.”

During a pre-fight check up three years ago, doctors discovered a brain tumour. It would sideline Francotti for three years. But after a long battle, including brain surgery, Francotti is back, fighting pro and winning.

Francotti grew up in Valemount and graduated high school in 2001. The town was bigger then, but the choices of sports were still limited.

Francotti enjoyed adrenaline sports, like mountain biking, one of the kids few brave enough to attempt dropping straight down the bank at the TV Towers. It may have been the lack of sport options that the lanky teen wound up in wrestling, because his physique wasn’t quite there yet.

“When I was in high school there wasn’t even a [boys] basketball team. You can’t have a team with four people,” said Francotti, who would ultimately turn out to be a towering 6’5 adult.

The school of roughly one hundred students had a thriving wrestling program.

Coach Paul Dodd remembers Francotti coming to a few practices in Grade 8 and then joining the program in Grade 9 in the under 125 pound category.

“To be honest, he was lacking in confidence when he first started, but he did get aggressive in Grade 11. He wasn’t shy to step in by Grade 12,” said Dodd.

At exhibition matches, Dodd began to see his massive potential. “He was fierce,” he said.

Dodd was delighted to hear about Francotti’s win in MMA.

“As a skinny kid he needed technique. Now he has that, as well as strength,” said Dodd.

“There was only a handful of us that did it, but in a school that small it’s a huge turnout,” he said.

After highschool, Francotti worked on the rigs, and while there wasn’t an opportunity to pursue wrestling, he did get into weight lifting.

“When the opportunity arose to start training [for MMA], I already had a background in it,” he said. “Hands-on grappling is my strong point.”

At his day job Francotti does quality control at the CANFOR Lumber mill in Grande Prairie.

He doesn’t mind that the job is physical. It’s a good fit.

Francotti said that for his first professional fight, his coach asked him to practice striking his opponent.

He would have liked to dip his toe in the water, but it wasn’t to be.

Once the first few punches were thrown, the fight turned into a brawl with the two men standing toe to toe throwing everything at each other, he said.

“It was like diving in,” he said. He described protecting himself while trying to keep an eye on his opponents chin.

Francotti got the better of out the exchange. The two were separated, and that’s when he took his opponent to the mat.

“Once I took him down it was my world,” he said.

Despite his success in his first professional match, Francotti is realistic about his prospects and the earnings of a full time MMA fighter.

“I have a wife, a son, a mortgage, a full time job. This is basically a hobby, something I turned out to be pretty decent at,” he said.

Francotti has friends in the UFC and he says at times they can barely scrape by.

“We’ll ride it out and see what happens,” he said.

He said he’s lucky to have the support of his family, something he reciprocates with this wife Deena Cloutier.

“A couple years ago Deena took a layoff [from her job at the mill] to pursue a career in lash extensions. The same support that I get from her with my fighting, I give to her,” said Francotti. “It is amazing what two people trying to help each other achieve their dreams can do.”

Together Deena and Francotti have a son, Kylix, who is four.

During the telephone interview on Sunday evening, Francotti was engaged in another battle and the odds seemed a little more even than his battle with Harrison. Kylix was trying to open Christmas presents.

“It is the first Christmas that he realizes what is going on. Everyday he tries to tell me it’s Christmas,” he said.

Kylix, the tiny opponent was tenacious.

“Go ask your mom,” said Francotti desperately, coming closer to defeat than in his Friday match.