This series examines Valemount’s air quality problem in detail, the impact on people’s health, the myths about how to solve the problem, and possible solutions, from easy to far-reaching. 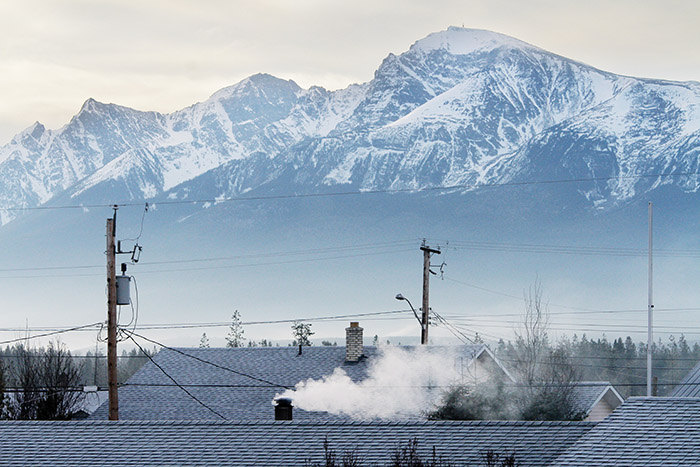 This is the fourth part of a five part series about Valemount’s air quality.

In Part 1, A Flammable Issue, we examined how a lack of affordable alternatives to wood heat has made the issue difficult to discuss.

In Part 2, we looked at the health effects of wood smoke in detail.

In Part 3, Shorter Lives, we looked at three reasons why the air quality is so bad here (Meteorology, Topology, Fuel availability).

In Part 4 we will look at the potential impact of responsible burning.

What we’ve learned so far:

Sarah Henderson of the BC Centre for Disease Control said that air pollution can put the whole population at risk, and is treated seriously by governments, but of all the sources of air pollution, smoke from wood appliances hasn’t improved much.

“When you think of other sources of pollution – motor vehicles and industry – we brought those under really tight control,” she said. “A car today emits 3% of what a car 20 years ago could emit.”

“What we haven’t done is controlled emissions from residential wood stoves.”

Henderson said the easiest thing to do is to improve wood burning practices.

“We need to build a culture of burning wood as responsibly as possible,” she said. “The fact that you choose to burn wood has health implications for your neighbours.”

There are other benefits to burning well, like reducing the amount of wood you use in a winter by up to 30%.

She said wood stoves with catalytic converters can improve emissions dramatically, but only if you follow good burning practices.

“If you are burning wet wood, the catalytic converter doesn’t work,” she said. “The most important thing is that if you are going to burn wood, burn dry wood and know how to create a low smoke, almost smokeless fire.”

According to epidemiologist Michael Brauer from the University of BC’s School of Population and Public Health at the Air Quality and Health Forum at the Community Hall on October 27, not all wood burning appliances are made equal.

An open fireplace is the worst performing with the most toxic smoke, conventional wood stoves are next in line in terms of performance followed by a modern wood stove.

But Henderson said any appliance, even modern ones, can produce smoke if the are burning unseasoned wood and not started properly.

Firewood should be dried and cured for a year, she said. “Build a woodshed if you don’t already have one.”

Henderson said the way to tell if you are burning cleanly is to go outside and look at your chimney.

If smoke is visible after the fire is going strong, there is a problem.

A great website with concise information on wood burning is warmercheaper.co.nz. It can be found by typing in the search terms: warmer cheaper.

The site shows how to make a great fire last through the night without producing smoke.

Henderson said a great option for people that can afford it is pellet stoves.

“I‘m a huge huge fan of pellet stoves. Here you have a technology where the fuel is relatively inexpensive, burn is controlled and emissions are very low.”

If you really want to burn wood, but can’t take the time to burn cordwood well, think about replacing your wood stove with a pellet stove.

One thought on “Stoked on solutions part 4: Burning cleaner”