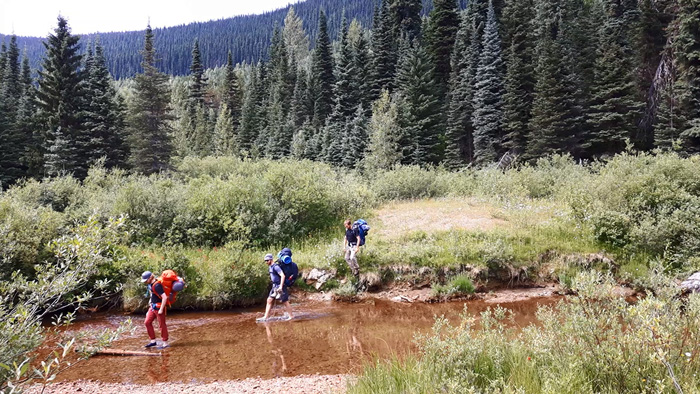 The Historic Goat River Trail, once a byword for a clash between loggers and environmentalists, is once again fully open to hikers after nearly 20 years.

Roy Howard of Dunster has been part of the effort to restore the historic gold mining trail since the 1990s. At that time, the local MFI Mill had an interest in logging part of the Goat watershed and logged a chunk in 2001. The Fraser Headwaters Alliance (FHA) environmental group fought back to save what they deemed an important and rare pristine wilderness.

Howard recalls a time they put banners along the highway, one fastened 50 feet up an ancient cedar as part of their campaign to protect Goat River watershed.

The banners raised the ire of someone who cut down the approx. 600-year-old tree in order to fell the banner.

“That was a little bit of drama there,” Howard says.

In recent years, the conflict between loggers and environmentalists has simmered down thanks to greater protection in the area for mountain caribou which discourages logging and snowmobiling – the greatest threats to the Goat according to the FHA.

The group still wants the area to have protected status, which would create a continuous protected area between the Bowron Lakes Provincial Park and the West Twin Protected Area.

So what’s all the fuss about? You can now find out for yourself. Thanks to brush clearing and trail work over many years, the trail is now open to hikers along the full route.

“It means you’re openly walking along a trail, not having to fight your way through underbrush,” Al Birnie says.

The last time the trail was fully open was close to 20 years ago.

On Monday, Birnie and Howard set out to complete one last addition: an 80-meter elevated boardwalk at the 2-km mark at the Milk River end, re-routing the trail around an area of wet hillside and crumbling riverbank.

Despite being a more reasonable hike, Birnie warns it’s still a major wilderness hike. The Goat spans 95km east to west, connecting Barkerville to the Fraser River near Crescent Spur, and is comprised of two major sections – the Upper Goat (48km) and the Lower Goat (14km). The trail forms a section of the National Trail (one of two cross-Canada trails in the works, the other being the Trans Canada Trail).

Howard & Birnie say the trail takes 6-8 days to hike, but there are 3 campsites along the way and two are outfitted with bear caches and pit toilets.

The Upper Goat largely follows the 1886 route miners used to travel from the upper Fraser River to the Barkerville gold fields.

Those venturing out on the trail should go prepared, Howard warns. Not only are there bears, but without a GPS the remote wilderness can be disorienting. Hikers also have to brave a cable car river crossing and ford a few streams.

The region is home to threatened Mountain Caribou, lots of bears and Bull Trout that spawn in its channels. It is described by those who know it as “pristine wilderness.”

“It’s quiet and remote and there’s scenic mountains and great views above the Bowron Lakes,” Birnie says. “You’re out in the total wild, away from everything.”