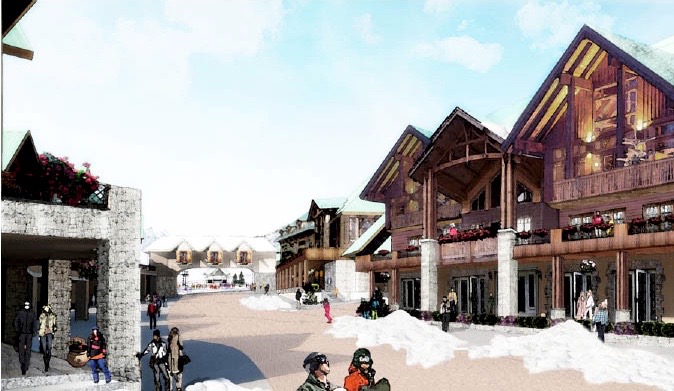 The investors are Hunter Milborne and Greg Marchant, both of Toronto. The government has said the value of Phase 1 will be roughly $175M, but Tommaso Oberti of Oberti Resort Design cautions that that figure is significantly more than the actual amount being invested.

The next stage in the process is the completion of a Master Development Agreement, with construction expected to begin in the spring of 2017, with an ultimate public opening in December 2017, VGD says.

The Master Development Agreement, according to the province, is simply an agreement stating it’s O.K. to build what is outlined in the Master Plan.

“VGD will feature some of the most impressive viewpoints for sightseeing in North America,” says Oberti.

“It will be a true multi-peak experience surrounded by stunning glaciers,” he says.

The resort will feature a modern lift system designed for sightseers and skiers, as it will bring visitors to the summits of Mount Pierre Elliot Trudeau, Twilight Glacier, Glacier Ridge and Mount Arthur Meighen, according to VGD.

“VGD will bring economic well-being to Valemount, and will have a positive impact on the Province of B.C. by attracting tourists from around the world,” — Valemount Mayor, Jeannette Townsend

VGD will provide public access to large glaciers at an elevation of over 3,000 meters (9,850 feet), according to the Master Plan, with Oberti noting the resort will feature the only such access in North America.

The resort is expected to have a 1,997-bed unit base area development, VGD says.

Valemount is a village of roughly 1,000 people.

“VGD will bring economic well-being to Valemount, and will have a positive impact on the Province of B.C. by attracting tourists from around the world,” she says.

The ski hill will have a vertical drop of approximately 2,050 meters (6,726 feet), the largest in North America and third largest in the world, according to VGD.

While the local economic impact/benefit remains to be seen, VGD says the resort is expected to become a major sightseeing and year-round skiing destination welcoming visitors from the nearby National Parks, and from around the world.

Joe Nusse, a Valemount resident who initially helped to pitch the idea to the Oberti’s, says while this project was conceptualized over five years ago, it’s proof of success for people who dream big.

“Time flies by… it just goes to show you if local support is high and you have a feasible project — investment will follow — approvals sorted through,” he says.

Construction of the resort will happen in the Premier Mountain Range, which is in traditional Simpcw First Nation territory. The Simpcw, along with the Regional District of Fraser-Fort George (RDFFG) and Village Council, have been supportive of the project and open to a partnership with VGD since the idea was first proposed.

“The Simpcw First Nation is pleased the Master Plan for the VGD resort has been approved,” says Simpcw Chief, Nathan Matthew.

“We look forward to participating in the continued planning and development of this important economic development project in our territory,” he says.

The Simpcw have already contributed extensive work to the project through their environmental consulting company, Estsek, Oberti notes.

The project has undergone a harmonized approval process, Oberti says, which included the RDFFG processing an Official Community Plan amendment, and rezoning in concurrence with the Master Plan review process.

The RDFFG will consider the third and final reading of the proposed zoning bylaw for VGD at their next meeting scheduled for Thursday, August 18, 2016 at 1:30 PM.

Oberto Oberti, — Tommaso’s father, as well as the project architect and originator of the vision —  adds, “This project would not be possible without the initiative and support of the people of Valemount and the Simpcw, and it has been carefully designed to integrate with the existing community.”