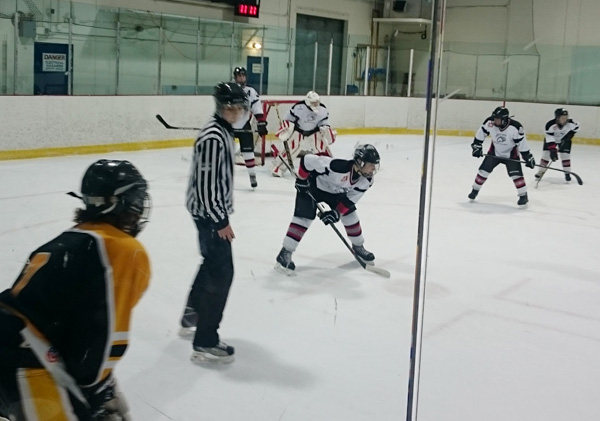 The McBride Grizzly Midget Hockey team travelled by charter bus to Penticton, BC to participate in a 16 team tournament over the Jan. 8th -10th weekend. There were teams participating from all over the province. The Grizzlies first game action was on Friday night against host Penticton. After coming out sluggish in the first period, the Grizzlies found their legs and skated to a 5-1 victory. Grizzly center, Keith Shawara, exploded for 4 goals and 1 assist. Bryden Basran also had a excellent game with 1 goal and 3 assists. Dylan Vizza contributed with an assist. Grizzly forward, Shaelyn Braaten, sustained an injury during the game when she took a full slap shot on the inside of her foot.

Saturday saw the Grizzlies play two games, the first against Vernon. The fast skating Vernon team took the lead in the first period and notched three more in the second to take a 4-0 lead going into the third. The Grizzlies could not find their scoring touch hitting the post 3 times. The Grizzlies finally notched a goal by Basran which was assisted by Dawson Drader with just over two minutes left in the game. Goaltender, Robert Knezacek, shut the door in the third with a 34 save game performance but it wasn’t enough with the Grizzlies losing 4-1.

After a quick trip to the Penticton Hospital for forwards Shawara (jaw) and Braaten (foot), although not 100 per cent, both were cleared to play.

The afternoon game saw the Grizzlies take on another fast skating team from Langley. The Grizzlies trailed 3-1 after the first with the lone unassisted goal coming from Vizza. Langley was the better team until midway through the game when the Grizzlies started applying pressure in the Langley zone. Unfortunately the Grizzlies had no puck luck and hit the post or crossbar three times in this game also. Langley was able to score a goal in the second and third period with no reply coming from the Grizzlies despite the all out effort. Knezacek stopped 33 shots in the 5-1 loss. This was uncharted territory for the Grizzlies as this was the first back to back game losses in two years.

With the loss to Langley, the Grizzlies were relegated to the consolation round and a game on Sunday at 10 am for 7th place. Despite being very disappointed, the players were ready to play against the team from Aldergrove, BC. The Grizzlies took a 3-0 lead after the first period on goals from Vizza (2g) and Rylan Moore. Assists went to Billie Littlechild, Austin Gibson and Drader. The Grizzlies broke the game wide open with 4 goals in the second from Vizza, Austin Gibson, Shawara and AP Ethan Quam. Assists went to Brett Jones, Austin Gibson, Noah Janeke, Shawara and Drader. It was more of the same in the third period as the Grizzlies notched 3 more goals. Valemount product Darian Griffin, Jordan Gibson and Basran notched goals with Griffin, Quam, Shawara, Moore and Basran getting helpers. Knezacek’s shut-out bid was spoiled with 7 minutes left in the game when Langley’s Bradley Taylor scored. The Grizzlies took the game with a decisive 10-1 win.
Despite the players being very disappointed in the results at the tourney (2 wins 2 losses), Grizzly coaches were proud of all the players’ effort all weekend. The Grizzlies record this season thus far is 12 wins, 2 losses and 1 tie. With the last win on Sunday, it was a much happier long bus ride home. Many thanks to Grizzlies manager (BMIC), Kristine Drader, for her great organizing during the trip. Next tournament action for the Grizzlies is in Mackenzie in mid February.