It turned out to be an oddly warm weekend in February, but the discussions and energy seemed even hotter at a geothermal workshop hosted by the Valemount Community Forest on Friday and Saturday.

About 100 people, many from the Robson Valley and some from as far away as Banff, Calgary, Castlegar, Whitehorse, Oregon and Alaska showed up on Feb. 12th and 13th for presentations and a panel discussion around the potential for various geothermal applications in the Valemount area.

The workshop started early Friday afternoon with “Geothermal 101” from Craig Dunn, chief geologist with Borealis Geopower. His presentation was intended to help people understand the geology and some of the basic ways we can use geothermal energy, either directly for heat or by converting it into electricity. With a touch of sarcasm, Dunn says geothermal heat is not really renewable – we’ve only got about 6 billion years of heat left in the earth’s core. But you need water to be able to transfer that heat from deep in the core up to where you can reach it. What can happen is the heat from a specific reservoir can be depleted, so projects must be carefully planned and monitored.

Alison Thompson, chair of the Cananian Geothermal Energy Association (CanGEA) came next, outlining some simple ways geothermal heat can be used. She showed examples from various trade missions like green houses and a fish farm in Klamath Falls, Oregon, and in a “failed” project in Germany. It was a failure, she says, because the developer was looking for enough heat to generate electricity, then heat homes, then greenhouses. Turns out he didn’t find high enough heat, so he started with the geothermal greenhouses first – and created hundreds of jobs growing tomatoes and peppers which were then processed into ketchup and salsa.

Next came a close-up look at the variety of direct-use applications in Klamath Falls, presented by Toni Boyd, formerly of the Geo-Heat Centre at the Oregon Institute of Technology. Even though low-cost natural gas is available in Klamath Falls, geothermal heat is used to melt snow on sidewalks and bridges, heat hospitals, homes, public buildings, most of the OIT campus, and brew craft beer at what used to be the city’s old creamery. Boyd says she didn’t know as a child that the pool she swam in was heated by geothermal – now she can help you find out just about anything you need to know about direct-use, including some advice on what hasn’t worked and why.

After dinner, Bernie Karl, owner of Chena Hot Springs Resort in Alaska, gave an entertaining and eye-opening presentation on what they are doing at the resort. Sixty miles from the fuel and power lines in the closest city of Fairbanks, Karl and his staff built a geothermal power plant, providing self-sufficiency for the resort, year-round green houses, and cooling for a year-round Aurora Ice Museum. That is just a few of Karl’s successful ventures to make the most of what God has given, including, as he says, “the heat under our feet.”

Saturday morning featured Mike Sato, renowned builder of natural, Japanese-style hot springs, who visited the Canoe River hot spring when it was last accessible for a couple weeks in the spring of 2008. The hot spring has been under the water of Kinbasket Reservoir for most if not all of the year since Mica Dam was completed in 1973.

Following that, participants had an opportunity to ask questions of the panel, including the presenters and Craig Pryor, manager of the Valemount Community Forest. After the workshop, Pryor said the VCF is very excited about the jobs that direct-use geothermal heat can provide, like greenhouses and expansion opportunities for a local brewer. He says the board has been interested in geothermal for some time, and is open to anything that can bring jobs to the community. He says the workshop really opened some eyes about the potential uses of heat, which may also help attract some small scale mills, along with the VCF’s recent purchase of additional wood volume.

The meeting was presented by the Valemount Community Forest and the Village of Valemount, with funding from Columbia Basin Trust and the Southern Interior Beetle Action Coalition.

Keep an eye out here for more stories on the potential and progress of geothermal in the Valemount area. 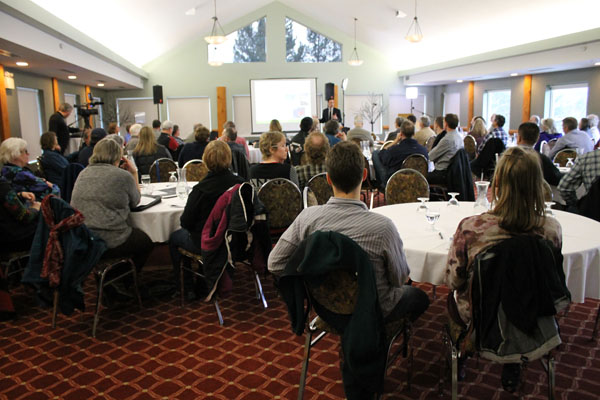 One thought on “International geothermal meet heats up Valemount +VIDEO”