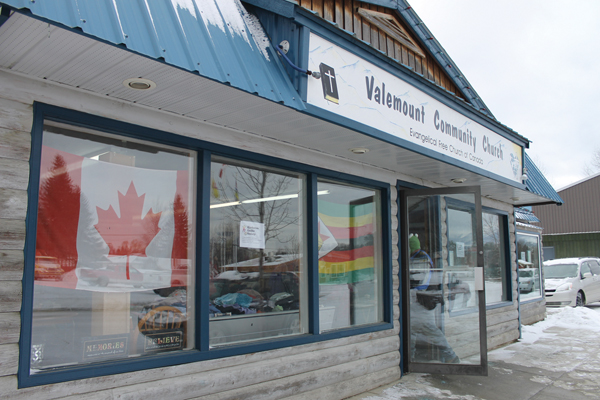 Fifth Avenue has been home to the Valemount Community Church since 2012, but is hosting a last community event this week to commemorate its last days in that location.

Pastor Conrad Broersma confirmed the Community Church will be out of the rental property at 1255 5th Avenue by the end of January, but remains vague on the Church’s plans beyond renting the Valemount Legion for Sunday services.

The 5th Avenue property owners, Peter and Patricia Reimer, had received a temporary use permit and one extension to enable the church to use the property which is currently zoned Central Commercial (C1). During a review of potential changes to the zoning bylaw in early 2015, Peter Reimer, who is also a Councillor with the Village of Valemount, argued that our zoning rules should be more flexible and inclusive, and that many municipalities allow church and religious assembly uses in their downtown commercial zones.

Broersma is also the Legion Chaplain, and says that quite a few of the Church’s members are also Legion members, and do a lot of volunteering with the Legion including during its Friday night family dinners.

Pete Pearson, president of Branch 266 (Valemount) of the Royal Canadian Legion, says both organizations support the community, and the Legion is quite happy to welcome the church and any other organization that wants to rent their facility.

Over the last three years, the Community Church has hosted a variety of events like book fairs, art shows and sales, book readings, youth open-mic events, and free movie nights. Their last community event will be a free soup and bun lunch planned for Wednesday, Jan. 27th.