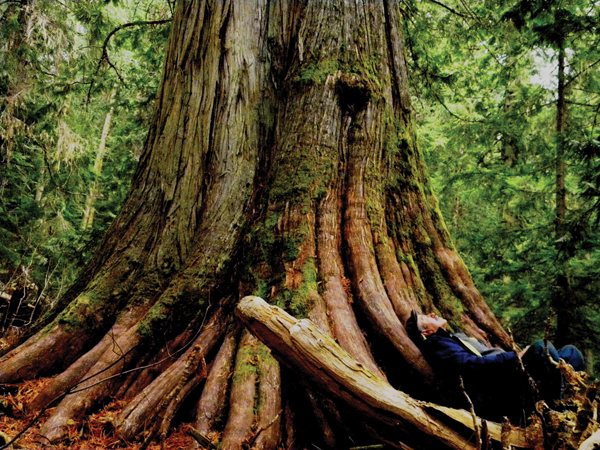 Destined to become mulch, the ancient stands of cedar in what’s now known as the Ancient Forest overcame their death sentence through a twist of fate. Dave Radies, a graduate student at the University of Northern British Columbia came across them in 2005 while studying interior old growth forest. He saw the markings on the trees and learned that they would be soon harvested under salvage Licence FL A61216 – Block 486 and he sounded the alarm.

We are in the Ancient Forest, located 113 km east of Prince George, about 90 km from McBride. Many things have changed since 2005 in the silent forest, above all, the logging was stopped. In 2006 the Ancient Forest Trail was built, thus giving access to the public deeper into the forest. Awareness of this hidden treasure grew fast. In 2008 a greater level of protection for the old trees was obtained through Recreation Order #149 establishing the trail as an Interpretative Site under Section 56 of the Forest Range and Practice Act. But the story was far from over. Between 2006 and 2013, through a heroic effort, the Caledonia Ramblers Hiking Club of Prince George, assisted by other dedicated friends of the Ancient Forest have built the 15 Km Driscoll Trail, Ancient Forest Trail and a wooden trail – the Universal Boardwalk. Now the forest could welcome everybody, from babies to centenaries, and people in wheelchairs. In 2015 more than 50,000 visitors enjoyed walking through the forest, compared to just a few thousands in 2008! The volunteers have made over 400 trips from Prince George for of total of over 92,000 Km, and a total of over 8,000 hours of labor of love and respect for the old trees has gone into these three projects. The construction of the Universal Boardwalk took three years and 5,700 hours. Sixty tons of lumber was carried by hand, three tons of hardware was used to fasten the boardwalk together. Uncounted sweat and exhaustion.

We walk through this incredible forest, undisturbed for centuries, and we feel transported to a different time. The air smells so good, the cedar scent reinvigorates us. The captivating wild view of contorted branches and trunks is surreal, this diverse ecosystem creates an awe inspiring atmosphere and we become grateful for this hidden treasure. The enchanting forest is embracing us.

The same moist maritime air masses that create the coastal rainforests of the Pacific Northwest (such as the famous ones in the Olympic Peninsula, WA, USA) are responsible for a second rainforest, located far to the interior. These currents deposit rain on the west coast, then continue to move east until forced to rise up over a higher mountain range – the Rocky Mountains.
They deposit rain in the summer or snow in the winter on the western Rockies, whose low to mid-elevation forests are kept wet all year. The inland rainforest is home to the western red cedar and western hemlock, among other trees. The mountain caribou is a distinctively interior animal, at home here, while the salmon swim upriver and spawn in the inland forests creeks where it dies, but not in vain. It gives itself to the forest and its inhabitants of all kinds. Certain species such as stubble lichens, reach impressive diversity in the inland rainforests, probably because the conditions created by the long lasting snowpack. The interior temperate forest is especially rich in wildlife trees, trees old and large, with hollow centers and decayed cavities that provide good habitat for other species.

Most temperate rain forests are found by the ocean, but our Ancient Forest is 800 Km away from the ocean, making it the only known rainforest in the world so far from the ocean. This area is so unique that in 2012 researchers from the UNBC proposed that the Ancient Forest should be designated a UNESCO World Heritage Site. Worldwide, the temperate rainforests are rare. A few hundred years ago, tropical rainforests cover almost 11% of the earth, while temperate rainforests covered only 0.3%. Today British Columbia northern interior mountains host unique inland wet-tempered rainforests and ecosystems. These are now the focus of interdisciplinary research at the University of Northern BC, although the interior “wetbelt” is also internationally recognized in the scientific literature. This interesting natural area has few permanent residents for now, but the cumulative impact of forest and logging operations, and road development is steadily increasing. The 1992 BC government’s Old Growth Strategy recognizes that many non-timber values are derived from old-growth forests. The locals also demand better accommodation of non-timber values in the interior wetbelt, which is expressed in increased methods of conservation. A recent survey showed that the ecological features important to the residents of Dome Creek and Crescent Spur (closest communities to the Ancient Forest) include the health of the water, air and soil.
Residents feel connected with the forest and mountains, natural elements that define who they are and why are they here. To them, the inland rainforest and its ancient cedars play an important role and enriches their lives. The old forest is fast becoming a regional and national attraction.

Early this month the Province held a series of regional meetings to consult with the residents and obtain feedback on the plan to protect and preserve the unique ecosystems of the Ancient Forest/Chun Toh Whud U Jud. The meeting in McBride gathered about 30 people last week. The province is working with the Lheidli T’enneh First Nation and other organizations to potentially establish a provincial park, and possibly further to propose the site as part of UNESCO World Heritage. The Ancient Forest covers more than 12,000 hectares of mostly unlogged inland temperate rainforest containing giant red cedars, many older than 1,000 years. The key questions include:
-how much of the area should be protected?
-what activities should be allowed? What economic impact?
-what role can the public play to ensure the preservation of the site?
-should the Province continue to support efforts to designate this old forest as a UNESCO World Heritage site?

Residents are invited to send their suggestions and concerns to: [email protected] by November 2nd.