The biggest fish was a bit smaller than last year, and they guy who caught it was much younger as well. Braden Smith will get his name on the ‘Big Fish’ trophy for the biggest rainbow caught at the Valemount Marina Association’s 34th Annual Fishing Derby this past weekend. About two dozen trophies went out on Sunday evening, with Smith’s 3.66 pound rainbow netting him the big trophy. He also won three trophies in the 7-12 year-old age group, with two more going to Sapphire Pelletier and Michelle McNee. Miah Fraser tied Smith for number of trophies, with four in the 13-15 year-old group, with Sydnie Pellletier claiming the largest rainbow in the group. Six and under age group trophies went to Piper L’Hirondelle for the largest rainbow, two to Mica Pelletier and one to Mason Lewis (no coarse fish caught in the six and under group). Kerri Hauer took two trophies in the ladies group, with Dixie Burdon, Jenny Nordli and Charlene Jones netting the rest. Smith’s dad, Kurt Smith picked up the largest rainbow in the men’s category, with Russell Mallach, Rylan Battensby, Ron Moss and Jeremy Schlam picking up the other trophies. Cooper L’Hirondelle picked up the winnings (a fishing pole) for the youngest fisherboy, at two years (Sunday was his birthday) and Nora Woods grabbed the youngest fishergirl prize at two months. Matthew Schalm sang O Canada to open the awards ceremony, after singing in Jasper for the Tour of Alberta the day before. Clockwise from above: Braden Smith with his winning fish; Michelle McNee and Dixie Burdon pick up their trophies from president Owen Torgerson; Abigail Reed shows off her medal for participation. 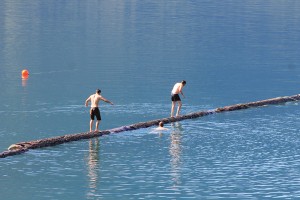