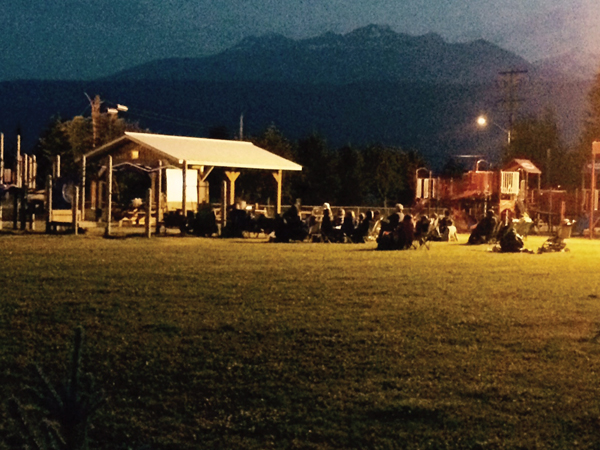 On July 3rd, the organization opened the doors to their McBride offices on 3rd Avenue with face painting , street bowling and cake. They followed up with a party in Centennial Park in Valemount the next day, and capped it off with an outdoor movie that night.

The Society was originally incorporated in July 1980 under the name of the Robson Valley Homemakers Society, and hired their first administrator, Sharon Hart. Amy Bartlet soon took over the reins and stayed on until 2010, though two name changes. The name was changed to Robson Valley Home Support after the group was approached about taking on the Mental Health Worker and what is now known as the Family Support Program contracts back in 1990. Then in 2009, the name was again changed to the Robson Valley Support Society, after Northern Health took over the Home Support Workers program.

Jackie Edwards has been president of the board since 1983, and says she was nominated and elected before she really knew anything about the agency. With the 35th anniversary coming up, the board decided last year to take a look at things and get back to the society’s roots – being client centred and helping the community where it can, and doing a better job of getting the word out about the services they offer.

“We want to find the gaps and see how we can fill them,” Edwards told the Goat last winter. “We know there are people falling through the cracks, but we have to prove the need in order to get funding for the programs.”

Edwards says the board has started working on a strategic plan for the next few years, with the help of Jill Craven, the new Executive Director. Craven was hired in February, after the board worked briefly with a transitional executive director, Peter Doukakis, who specializes in helping non-profits get better organized so they can do what they do better.

Today, the society has 18 employees and provides a number of programs throughout the valley including infant and child development and family support programs; advocacy and counselling and violence prevention programs like Stopping the Violence and Respectful Relationships; Community Outreach Services; and the Safe Shelter Program. The society also runs McBride-centred programs like Employment Services and Adult Literacy.

And the Society is now offering the Robson Valley Better At Home program to provide non-medical services for seniors living in the valley, like handy-man services, friendly visits and some transportation services. Edwards says friendly visits to seniors help combat loneliness and depression, which can both result in seniors sometimes not looking after themselves properly. Having someone stop by for a visit, and maybe to help with some household chores can make a big difference. It’s something the Society used to do, but funding cuts since the 1980’s meant the focus had become only personal care. But the Better At Home program provided the opportunity to help fill that hole again.

Edwards says she is always on the lookout for new board members as well. And watch for the Society’s new website, currently under construction.