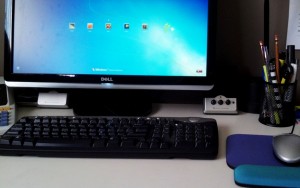 The local school board is trying to protect kids’ data from the prying eyes of the government of the United States, Trustee Tim Bennett said in a presentation last week. Part of the challenge of the district’s pilot programs with tablets in classrooms is finding platforms that don’t host students’ work on US soil. The district has already nixed using Google Drive and Dropbox, among others, over surveillance concerns because of the country’s Patriot Act, he explained.

“We can’t allow them to have access to our student data,” Bennett said.

“Well done!” someone shouted from the audience.

The meeting happened in the library at Valemount Secondary—the board last met in the town three years ago. Meetings are mostly in Prince George, with one meeting yearly in an outlying town, either Valemount, McBride, or Mackenzie

The trustees also dwelled on the numerous challenges the district faces, chief among them a budget shortfall of $3.3 million. That amounts to almost three percent of the district’s operating budget this past year.

Trustee Brenda Hooker described the meetings where she tried to figure out where to cut the $3.3 million from the budget for the coming year as “almost like counseling sessions.”

“We don’t have any more suggestions,” Hooker said. “We need more money in the system to address student needs.”
The deficit comes partly from a structural deficit in the district’s operations, partly from unfunded increases in the cost of things like heating schools and keeping the lights on, and partly from funding cuts handed down by the provincial government. British Columbian schools have to cut $29 million from their budgets for administration, and the local district’s share of that comes to about $700,000.

There will be no school closures in the Robson Valley this coming year, trustees said.

There is also no plan at this point to change the funding model for BC schools. Some advocates say the model, which allocates money on a per student and per class basis, shortchanges small rural schools—though there is some supplementary funding for geographically isolated schools and those with few students.

About fifteen people attended the three-hour long meeting, most of them local teachers and principals. Tina Cousins spoke for the Prince George Teachers’ Federation, rattling off a list of things that were giving teachers “angst.” Among other problems, Cousins said teachers feared taking sick days because there sometimes weren’t substitutes available. She added that teachers in rural areas feel like they’re “juggling courses” when they have to teach everything from math to gardening—which happens at Valemount Secondary.