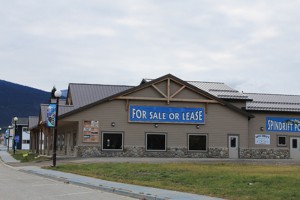 In front of a packed audience last Tuesday night, librarian Naomi Balla-Boudreau asked McBride’s Village Council to support a grant application to relocate the library and the museum to 521 Main Street.

It was both a false start, and the herald of a new start.

In an interview, Mayor Loranne Martin disclosed that the grant Balla-Boudreau sought couldn’t be used to buy land and so couldn’t fund the move. But Martin also announced she wanted to create a committee to work towards relocating the library and museum. The committee would consist of Regional District rep Dannielle Alan, a delegate from the boards of the library and museum, and a member of McBride’s Village Council. Village staffer Karen Dubé would also contribute, identifying and applying for appropriate grants.

“It’s very difficult to find grants for bricks and mortar,” Martin said, noting that the previous council didn’t support the library and museum boards’ push for a “centennial” grant in 2013, which could have been used to buy the property for the relocation.

“The bulk of the community is already behind it,” she added. “It’s not something that I want to give up on.”

The bitterly controversial proposal to move the library and museum to the new, large, and empty building smack at the entrance to McBride last came before the council in 2013. The boards of the library and museum sought that centennial grant – specially available because it was McBride’s 100th anniversary – and they needed the Council’s and the Regional District Board’s formal blessing. Neither gave it, concerned that the move would create new, long-term expenses and erode the village’s tax base – while supporters said there wouldn’t be any new spending, and the taxes would be covered by fundraising and profits from businesses in the library/museum-to-be.

Both sides see the fate of McBride at stake in the relocation fight. It’s the transformation of an embarrassing vacancy into a hub for the village and a draw for tourists – as well as a needed upgrade from the declining facility on Dominion Street. Or it’s a second rate investment that’ll raise taxes and kill an already struggling town.

Voters seemed to make a choice, dumping the mayor and the entire council the following year, with the library a central issue in the campaign.

With the proposal’s return, the same disagreements remain.

The biggest issue is the combined $20,000 tax bill on 521 Main Street and the two neighboring lots the library/museum plan to acquire. Right now the owner of the properties, local businessman Tom Ryan, pays that sum into village coffers – the $20,000 is more than six percent of all of the tax revenue McBride collects. If the library/museum moves in, they’d have to come up with the money.

Relocation proponents have long insisted that the move would only happen if it required no tax increase and no debt. Balla-Boudreau said they plan to raise part of that annual $20,000 through fundraising, and there are vague proposals for a gift shop and a coffee shop in the new space, the profits of which would contribute.

The library and museum boards would also sell their current building to raise money. (The Regional District owns the annex.) And the boards already have $90,000 in the bank from holding benefit dinners and selling apple pies over the past two years, netting about $5.70 a pie, Balla-Boudreau said. They’d continue that on a smaller scale to contribute towards the tax bill, which would amount to some 3,500 pies annually.

“It would be difficult to raise the full amount via [fundraisers]. We’re cautious of exhausting our fabulous volunteers,” wrote Balla-Boudreau in an email.

“Taxes are still an issue for us and we’re trying to figure it out,” she added.

The other sticking point is 521 Main Street itself. Some raised concerns about how its owner, Tom Ryan, stood to benefit from the sale at a time when few local properties are finding buyers.

Others said the space should stay commercial, and that Main Street isn’t the right place for a library, as former-Mayor Mike Frazier argued when he was in office.

The council rezoned 521 Main Street as a public development during Frazier’s administration, and a committee was also formed to look into solutions for the library, but dissolved after several meetings.

“The only option the library museum board would consider was 521 main street, so we left them with the tasks that they needed to move their case forward,” said former-Councillor Rick Thompson, who served on the committee.
Frazier couldn’t be reached for comment.

Supporters of the relocation are resigned to the opposition they’ve faced towards their chosen site. Marilyn Wheeler, the chair of the museum board, who said she was speaking for herself alone, as she hadn’t consulted her colleagues, stressed that the boards had looked into different sites for years before settling on 521 Main Street.

The so-called Shoop Report, which argued for the location, said that it was the cheapest building with the space and accessibility required. Renovating the library/museum’s current site, for example, was deemed more expensive for less new space.

“When you’ve spent as much time as we have looking at the options,” Wheeler said, trailing off. “How long do you have to look before it’s acceptable?”

“It’s not a long term plan,” she said of the current library/museum buildings. “The amount of water we pull out of this room, it’s not ideal,” she said, gesturing to the dehumidifier humming in the corner. She says the building is poorly insulated. The display of children’s drawings in the museum is currently the victim. “When they first put up this exhibit everything started to wrinkle.”

Meanwhile, the Regional District still won’t sign off on a grant application until they get more information.
The most recent proposal, from 2013, didn’t properly demonstrate that the relocation wouldn’t create new operating expenses beyond the $150,000 the district contributes annually to run the library/museum, said Jim Martin, its chief administrative officer.

“It’s about getting the right information,” Martin said, “So we can say there’s a sound business plan behind it.”