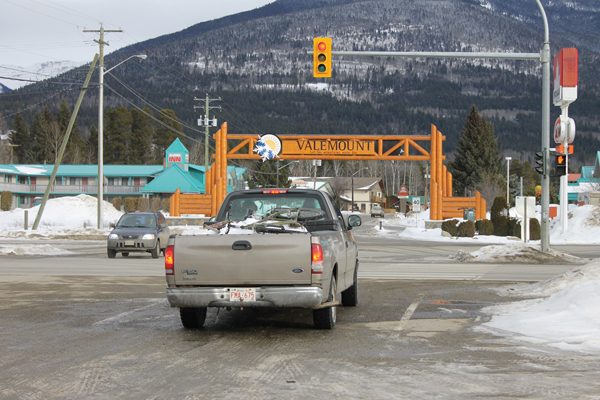 The Ministry has heard some concerns about the new stop lights at Highway 5 and 5th Avenue, but it says the lights are working fine. However they do plan to better define the lanes once the weather permits.

Since the new stop lights were installed in Valemount late last fall – the first on Highway 5 and 16 between Prince George and Kamloops, about a 600 km stretch – locals have had trouble getting the sensors to recognize a vehicle is waiting to cross the highway.

“The best strategy is to ensure that you are stopped on the sensors when you pull up to the light,” says Kate Trotter, spokesperson for the Ministry of Transportation and Infrastructure. “The sensors are installed in the road lanes and the loop detection system will be triggered when a vehicle pulls up.”

It can take between 15 seconds and one minute for the light to change, depending on where a cycle the system is when the sensor is triggered. But if a vehicle doesn’t pull up to the loop detector, or is to one side of it, they system will not trigger. Trotter confirmed that the lights on 5th Avenue and Pine Road will remain red until either the detection loops are tripped or the pedestrian button is pushed.

So how do you know where the sensor is?

Jasmin Gasser is one of the people asking where to stop to make the lights turn green. “This is a huge hazard and I have seen it confuse several people,” she said in a post on social media. “It needs to be marked more clearly. It’s especially bad if you come from Pine Road into town.”

On Wednesday, Jan. 21, the system seemed to be working fine. As I stopped to take photos of the intersection, a vehicle pulled up to the lights from Pine Road, stopped on the cuts in the pavement where the sensor had been installed, and the light turned green quite quickly. But what is left of the old painted lines for the lane don’t seem to match up with the crosswalk lines that are still very visible across the highway, or with the entrance to 5th Avenue. And with the least bit of snow on the ground, the cuts in the pavement aren’t visible, although the old crosswalk lines sometimes still are. The new crosswalk lines aren’t painted yet.

Trotter says ministry staff has been on-site over the last week to test the signal light and detection system, and they’ve verified it is working correctly. The ministry has also asked the electrical maintenance contractor to complete another review of the lights and controllers to ensure they are functioning correctly. She says snow does not affect the sensor system. But the ministry does plan to better define the lanes once the weather allows the addition of reference lines and stop bars.

The ministry encourages motorists to only proceed on the green signal, says Trotter.

Maybe we all need a navigator with a hockey stick to push the pedestrian button from the passenger window.