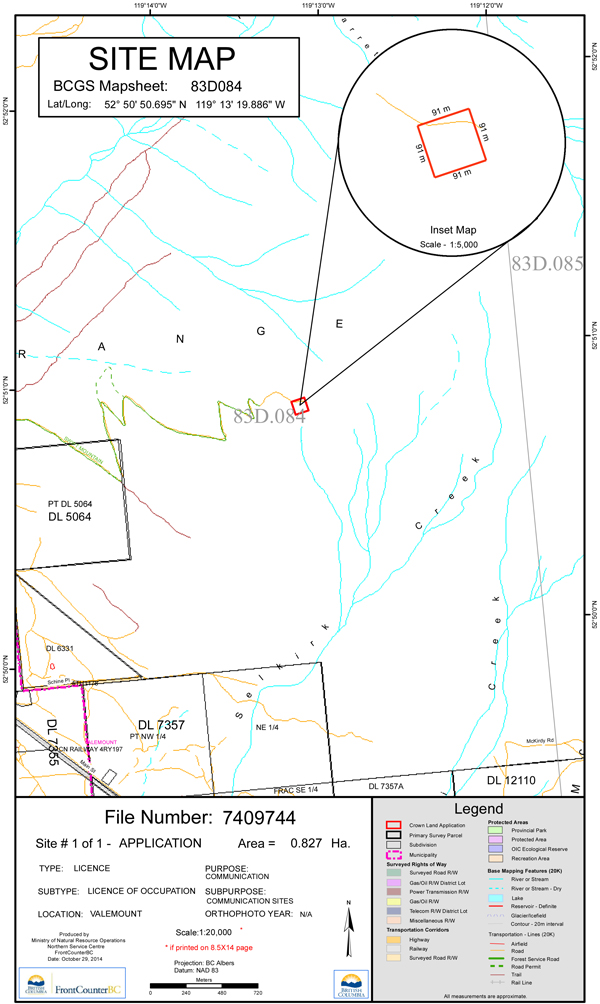 The Prince George Fire Operations Communication Centre currently uses a leased site at the top of Mount Holiday, about 30 kilometers east of McBride, and a radio repeater at the Valemount Fire Hall for communications in the valley. The current site on Mount Holiday is only accessible by helicopter, which increases costs of maintenance and repairs.

The Regional District of Fraser Fort George owns and maintains the communication network for fire and rescue agencies within the district (funded by the 9-1-1 Emergency Response Service). In a report to the Board in June, Murray Scott, Public Saftey Coordinator for the Regional District, said relocating the radio repeater from the Valemount Fire Hall to the new site would also improve radio coverage for firefighters in the valley. But the location being considered was not clearly identified in the report at that time.

The report said the site was approx. “3.5 kms northeast of the Village of Valemount,” and that the application for Crown land tenure was for approximately 200 x 200 feet (just under an acre). A map of the proposed location was not included in the report to the board, but is available on the provincial government’s website of applications for Crown land tenure. The map shows the site at the top of a logging road that is marked as “Swift Mountain.” Swift Moutain is now know as a different mountain. The current location nis known as Five Mile Hill, which is a shoulder of McKirdy Mountain. The map shows a proposed area of 91 x 91 meters (almost 300 x 300 feet, or just over two acres) at the top of the road.

Patricia Thoni, president of the Yellowhead Outdoor Recreation Association, says they support the application to improve communications in the valley, but have some concerns about the construction of the tower, and would like to see them addressed before the communications site is developed.
For many years YORA has operated and maintained the McKirdy Cabin, accessed from the Five Mile Hill, as well as other trails and infrastructure in the area. The association, with the help of Valemount Community Forest and various funding partners, has been maintaining and improving the road for over three years. They’ve also been planning additional infrastructure improvements, including a viewing platform at the top lookout area, which is also part of a rec site.

“It would be nice if we could talk to someone about potentially combining the tower with a viewing platform,” says Thoni. “And at least for the sake of discussion, it would be nice to know if they’ve considered other areas.” Thoni wonders if the logging road up the north side of Swift Creek has been considered, though she says the road up Five Mile Hill is certainly in much better shape now than the other road.

A draft of the letter YORA is planning to submit to the government says they would like assurances that existing and future investments in recreation improvements will be respected and protected; that facility and road maintenance for the site be done in a manner that minimizes impacts on recreational uses in the area, including hiking and skiing; and that design of the tower and supporting structure minimize negative visual impacts, and eliminate the use of chain-link fences around the site.

Donna Munt, General Manager of Community Services for the Regional District says the tower will not impact the parking area at the top of Five Mile Hill at all. She says the proposed location for the tower is just down from the parking lot, in the vicinity of another tower currently at the site.

“If the Regional District gets approval for this site our intention is that the tower will be as low as we can go as to not impact the recreational area visually or operationally,” says Munt. She says the exact height of the tower will not be known until a detailed radio path analysis is completed.

Comments from the public on the Crown land application will be open until Friday, Dec. 12th. To
comment, go to http://www.arfd.gov.bc.ca/Application
Posting/viewpost.jsp?PostID=47738.