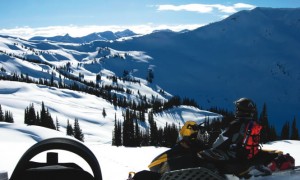 The Robson Valley Search and Rescue team is looking for mountain snowmobilers who can give them a hand on the mountains when they need it. And they are starting a pilot program which may be able to help many other northern sledding communities as well.

The problem was easy to identify, but solving it took a bit more effort, says Mason. He met with Emergency Management BC and they came up with an idea for a Mountain Snowmobile Responder. Mason wrote the training material himself in the spring, and it was approved by Emergency Management BC in April. He’s donated it to search and rescue groups in northern BC in May, so other groups will be able to do the same thing.

“But I think they are waiting to see how the first one goes and get a little more input,” says Mason.

He’s planning to hold the first training course in the province in Valemount in December, followed by another one in McBride. The training is free, and volunteers will get 3-4 hours of classroom training, followed by 3-4 hours on the mountain, so they know what the SAR team is doing, and what they expect of the Mountain Snowmobile Responders.

The MSRs would be supplemental members, not regular SAR members, and they would never respond by themselves.

“Basically it is going back to the roots of search and rescue, when groups were formed by people doing the same recreational pursuit,” says Mason.

Mountaineers started mountain rescue teams, now he’s hoping recreational snowmobilers will be able to use the skill sets they already have – mountain snowmobiling – to help SAR in the winter backcountry. “If they already have that skill, the rest we can deal with.”

Mason says he’s looking for some people with skills in mountain snowmobiling who are familiar with the local riding areas, and have Avalanche Skills Training (level 1) and protective equipment, and are interested in helping out. Protective equipment includes helmet, avalanche transceiver, avalanche probe, shovel, all the things you should have already if you are riding in the mountains, says Mason.

The first Mountain Snowmobiler Responder Program will be offered in Valemount on Dec. 13th, 2014. Contact him at [email protected] or 250-569-7036 for more information or to sign up.

Mason says he’ll also be looking for more regular SAR members in the Robson Valley are soon. “But one thing at a time,” he says.