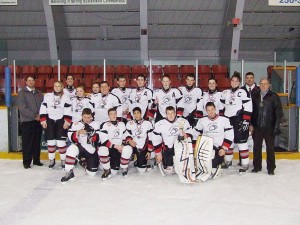 The McBride Grizzlies Midget Hockey Team started their season off with a Halloween weekend tournament in Merritt, BC. Teams from Vernon (2), Surrey, Langley, Abbotsford and Merritt participated. In Game 1 on Halloween night, the Grizzlies played the Vernon #4 team and took a decisive 8-2 win. Dylan Vizza had a very productive night with 4 goals. Grizzlies’ defenceman Rylan Moore, Noah Janecke and Bobby Brawn all chipped in with a combined 4 points (1G 3A). Grizzlie goalie, Robert Knezacek had a strong game between the pipes stopping numerous second chances. Forward Jordan Gibson, who got a late start to the season due to an injury, was his usual pest in-front of the opposing teams net.

In the first of two games on Saturday the Grizzlies met the host team Merritt Centennials. Center, Keith Shawara, led the way with 4 assists in the 8-4 win. Vizza (2), Moore, Bryden Basran, Darian Griffin and Billie Littlechild also notched goals. Grizzlies goalie, Tristan Quam, was steady in goal particularly on one glove-hand save. In the second Saturday game, Quam made some timely saves and the Grizzlies came from behind to tie Langley 4-4 in the exciting, fast game. Center, Dawson Drader, tied the game up with 6:48 left in the third. Moore, Vizza and Shawara also scored. Forward, Julie Vizza and Basran had two assists each.

The two wins and one tie put the Grizzlies in the semi-final against Surrey on Sunday morning. In the fast skating game, the Grizzlies took a 3-2 lead into the third period and went on to win 5-3. Defenceman, Austin Gibson had a strong game in his own end controlling the puck. Forward and second year player, Shea Braaten, continued to improve her play and the coaches noted it will only be a matter of time before she notches her first goal in hockey. Dylan Vizza (2G ), Basran, Griffin and Shawara all scored with Julie Vizza notching 3 assists. Brawn, Griffin and Moore also tallied with one assist each.

The Grizzlies met Vernon #2 in the final at 1 pm on Sunday. In a low scoring, fast paced, back and forth game both teams answered each other goals which resulted in the game being tied throughout. Dylan Vizza scored twice with Shawara adding a single. Forward, Brett Jones almost notched a fourth goal for the Grizzlies but ripped a wrist shot off the cross bar. At the end of regulation time the score was tied 3-3.

Tournament rules dictated the game would be decided in a shoot-out. In a very exciting shoot-out Shawara and Dylan Vizza were able to score for the Grizzlies with the Vernon team also answering with two goals in the first three rounds. Grizzlies goalie, Robert Knezacek was able to shut the door until a unbelievable tenth round when Vernon scored their third goal of the shoot-out. The Grizzlies were unable to score on their final attempt giving the Vernon Team the win. Although the players were very disappointed, coaches Gerry Porrier, Brian Shawara and Brady Knezacek were very pleased with the strong play and effort so early in the season.