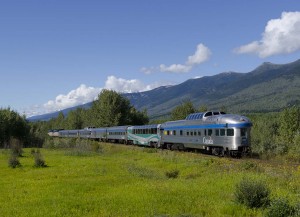 Photo and caption by Matthew Wheeler

The VIA passenger train line between Jasper and Prince Rupert became 100 years old on Sept. 2nd 2014. It was the first transcontinental railway to come into operation north of the much more celebrated Canadian Pacific Railway. Originally the GTP transcontinental line, the first train left Winnipeg late August, headed to Prince Rupert. From there, one could travel on to Vancouver. McBride’s Journal newspaper reported on the front page, September 2, 1914 that the first through train was on its way west, “Another step in the linking up of one of Canada’s great transcontinental railways …” This passenger service was in addition to all the local passenger trains along the line. Within two years the Grand Trunk Pacific had added special observation cars for people to enjoy the mountains. In summer 2014 for the first time in many years, VIA Rail passengers on the Jasper – Prince Rupert train can have been able to ride in the classic stainless steel dome car with an economy class ticket, on alternate trains. (Touring class passengers still have exclusive use of the dome cars on the other, alternate trips. Dates of each service through September 2014 can be found at viarail.ca, or call the McBride InfoCentre at 250-569-3366).