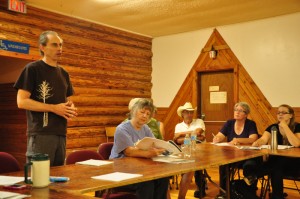 A meeting last week in Dunster to discuss farmland use issues included a presentation by a UNBC professor on nuances of the Agricultural Land Reserve, one of the issues facing small farmers.

Lelani Arris, president of the DCA and chair of the meeting said their meeting is not about pointing fingers, but moving forward, looking at trends throughout the valley, and trying to come up with positive solutions to finding places for new residents to live and farm.

Issues raised in the first meeting received considerable attention in the province, after a story in The Goat was shared with an online news publication, The Tyee, and picked up by CBC radio in Prince George.

David Connell, associate professor in the school of environmental planning at UNBC, travelled from Prince George to attend the meeting after reading about residents’ issues. He gave a short presentation on the Agricultural Land Commission (ALC) and some of the nuances of the ALC Act and land within the Agricultural Land Reserve (ALR).

“BC has some of the best legislation to protect farmland,” Prof. Connell said in his presentation. “It’s a good starting point to recognize that as a province, for the past 40 years, it’s been doing really well.” The ALC is about 40 years old. “Having said that, the recent changes to the ALC have changed the situation.”

At the end of May, the BC Legislature passed Bill 24, altering the ALC Act with an aim to introducing more “flexibility.” Prof. Connell pointed out that “flexibility” is both good and bad in terms of preserving farmland.

“The province and farmers have spent 40 years really building up a lot of credibility and stability around the ALR,” Prof. Connell said, “but with the introduction of flexibility, there’s a greater sense of uncertainty, and it really compromises that ability to count on precedent and documentation.” 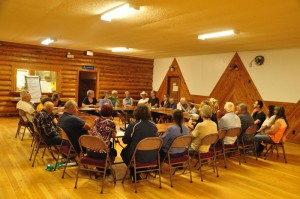 On the upside, flexibility within the ALC is what local residents appear to be looking for, Prof. Connell said.

“It seems there’s a desire for other solutions that aren’t immediately evident in the current legislation,” he said. “From a local perspective there’s this struggle to find the right balance between saving farmland, while encouraging and providing opportunities for, for example, new farmers.”

After Prof. Connell’s presentation, a discussion ensued on how to best enact change in line with local needs. Ideas were floated about confronting the outdated 12-year-old Official Community Plan, how to engage the different levels of government, and even the property tax system. But it quickly became evident that a cohesive vision for change was lacking among meeting participants.

“I think this is a really complex situation, it’s an age-old dance of individual and community,” said meeting participants Karyn Janecke. “What’s the big picture? Where do we want this community to be in 50 years? … I feel like it’s hard to discuss solutions when I don’t really know that we share the same issues and vision. Because if we don’t have that vision, where are we going?”

The meeting adjourned with a goal to seek input on what the local vision in terms of agricultural land use is. The Regional District is at the beginning phase of an agricultural planning process, an important opportunity for locals to have input on land use planning, Prof. Connell said. Arris urged valley residents—from Dome Creek to Valemount—to submit their vision for farmland and their community in the valley before the next meeting, in the second week of September. “Tell your neighbours to submit their vision too,” Arris said.