Last week I was invited by Adventure Management to spend some time shadowing the staff at the Valemount Visitor Information Centre, to see what they do. On Thursday I did just that – spent four hours with the counsellors, listening to their interactions with visitors and getting a taste of what they need to know – and how they manage it all. Here’s some of what I saw and learned.

If you walk into the Valemount Visitor Information Centre and take the doors on your left, you’ll notice the interpretive display room, often filled with kids who are free to touch the displays here; a beautiful hand-crafted quilt hanging on the wall; tall windows facing out to the centre’s back yard; and the hallway to spacious and attractive washrooms.

But through the doors on the right is a goldmine if you are the kind of traveller that likes maps and regional guides – like me. After hearing I like maps, Sandra Craig suggested I grab a copy of the six “Provincial Parks Map and Visitors’ Guides,” produced by BC Parks. She also told a family on their way home to Edmonton to grab one for their next trip, because she knew they were already planning it, and she knows the maps aren’t available every year.

She’s been around long enough to know – Craig says she has worked as a Visitor Information Counsellor for about 18 years. Bruce Wilkinson who manages the interpretive programs for Adventure Management says she is probably the best in the province.

“I love my job and I love my community,” Craig says. And she knows it well. But she doesn’t think that is the biggest key to being a good counsellor – that takes a desire to help and a willingness to learn and ask questions. She says she is curious – she truly wants to know visitors’ thoughts and she wants to help them enjoy their trip – because she knows if they do, they will come back.

“People always come back to BC,” Craig says.

Part of the training to be a counsellor at the Valemount VIC is what Craig has started calling the “Neighbourhood Mission.” It’s a list of 21 questions about local businesses and services that she made up early this spring, almost like an information scavenger hunt. Questions like “Which shop sells clothing but not shoes?” “Which store sells new and used products? Name two products in the store.” “Find camping gear that costs $4.19 and $27.99.” “Name three local people who are part of the War Heroes Museum exhibit.” It is designed to get the staff out into the community to find out what is available, to ask questions, and to be able to search for those odd requests that always come in. 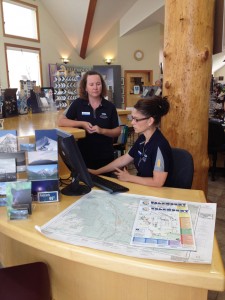 That of course is not the only training counsellors have to go through. They each have to take World Host training, which takes a few hours, and the Visitor Information Counsellor Training, which takes 24 hours, usually done over a couple weekends or over a few nights a week. And they have daily training – each day, the counsellors keep a record of things they learned that day, and other staff members have to read it each shift. On the day I was there, they learned you can get a copy of the Robson Valley phone book at the IGA. They learn every day from each other. For example Craig says she hasn’t been on all the local trails recently, but she knows which ones Linnaea Vanderzwan, her co-worker that day, has been on. They get a bonus for hiking the trails and sharing their experiences with their co-workers, a rather unique employment benefit, in my experience. While I was there, Vanderzwan got a question about where is a good place to fly fish. She wasn’t sure, but she pulled out a small brochure on local fishing, and asked Craig for some help. And they look it up – on the internet, in the guides, or they will call someone if they don’t know the answer.

Their job is not just to tell people about what is available in Valemount. They have to be knowledgeable about the rest of the province too, and a little bit about our closest neighbours on the other side of the Alberta border. For example, a family from Israel came in, and Craig asked if they had decided which route they were taking to Vancouver. They wanted to see both Hope and Hell’s Gate, but were on a tight schedule, so Craig gave them information about the routes to Vancouver and helped them find information about the types of attractions in Hope they were interested in. When she found out they were taking the ferry to Vancouver Island, she found and printed off the schedules and fees, because BC Ferries no longer prints their schedule, except on the internet. She also gave them the toll-free number to book their crossing, because she wants them to make the most of their short time in BC. 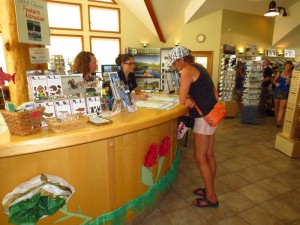 Not only do the counsellors answer questions – they ask questions first. When visitors asked “where is a good place to eat?” they ask “what kind of food are you looking for?” and they wait for another answer besides “Good!” When people asked “what is there to do around here?” they ask “what kinds of things are you interested in doing?” They ask where people are traveling to, and which direction they came from; if they need help with accommodation or attractions, either here or along their route; and if they’ve decided which route they’ll take. And they try to record all this information after each interaction – because that is how they gather statistics.

Craig says they take reservations for BC attractions because it can mean a much shorter wait for the visitor when they get to the attraction, as well as sometimes a small cost savings for them. And they book for local attractions as well, so long as the operators meet certain conditions. They book accommodations too, and try to keep track daily of which local places still have vacancies. Craig knows when Jasper is full that Valemount will be as well.

I never once heard the staff try to sell merchandise, although they have to know the local artists’ names, and they have to know info about the products. Craig says they don’t sell water or food, because it is available easily nearby. They sell fishing licenses because the Service BC counter is not open on the weekends or evenings. They stock products that say “Valemount” because people are looking for them, and they didn’t see anyone else in the community filling that need. Craig says they were getting a lot of requests for shot glasses with the word Valemount on them (I believe it, because my dad was one of them when he was here to visit last fall), and they couldn’t find anyone in the village selling them. So she found a supplier and had some made – they just arrived last week. (Dad, you might have a small package coming in the mail soon.)

Craig estimates that about 6,000 people would stop at the old Visitor Centre in a season, before the new one was completed in 2007. Now that number is about 18,000 per summer.