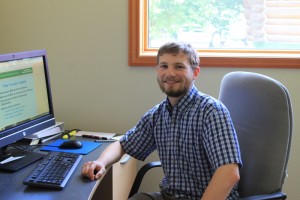 Though it takes a little getting used to, Cameron Bell, Valemount’s new intern, is enjoying living in a small community in the mountains. While getting a broad taste of local government management, he’s enjoying meeting friendly locals who seem happy to introduce themselves.
Bell, a recent graduate from UNBC, and the Goat has learned, Valedictorian of his class, is the Local Government Management Intern for the Village this year. The position is partly funded by Northern Development Initiative Trust, under a partnership with UNBC and the Local Government Management Association.
“Part of Northern Development’s goal through the program is to get permanent employment in the north for recent university grads,” Bell told the Goat. The program also supports capacity building and succession planning, to help smaller, rural, northern communities prepare for retiring senior staff.
Originally from Barrie, Ontario, Bell says he came to UNBC for the well-known quality of its environmental studies program. “I liked the idea of going to a small university in a small city, slightly more north.” But he admits the mountains, snow, skiing, camping and hiking opportunities were also a big pull.
Bell, one of seven other interns in the program this year, graduated with a Bachelor of Arts in Environmental Studies and a minor in Land Use Planning. He says he really enjoyed the environmental studies, but it’s not tailored for a specific career; it can take you in a lot of different directions. But he feels his background in planning and his past work with the student society at UNBC made him attractive to the Village, since Valemount doesn’t have a full-time planner. And in a small community, he knows he’ll get a taste of a lot of aspects of local government.
“I think that is what appeals to a lot of the interns in the program,” says Bell. ‘We get to do a little bit of everything and get some hands-on experience, to see what we really enjoy doing.”
He’d only driven through Valemount before, but it was on Bell’s top-five list of places to go when he applied for the internship, partly because he knew Katy Fabris really enjoyed it. Fabris, also a graduate from UNBC’s planning program, worked in Valemount and McBride last year under the same NDIT program. She is now working directly with NDIT, assisting small communities with planning issues.
Bell says Fabris was back in Valemount recently, helping the Village with some first steps in looking at affordable housing issues in the area. He says they’ve just had a preliminary meeting so far, with some stakeholders like the Robson Valley Support Society, real estate agents and people from other accommodation businesses in town, to try to get a sense of trends people are noticing.
“There is definitely no official plan or any intention at the moment, but we could potentially look at ways we can support affordable housing initiatives as a village,” says Bell. “Whether the village does it, or gives support to RVSS, or something like that, we don’t know yet.”
He says it’s more anecdotal than quantitative right now, just in the first steps, but they discussed affordability, seniors housing issues, temporary and seasonal workers, and people that might be in crisis. “There are a lot of different needs,” says Bell, and assessing which are the most prominent might be the next step. “It’s nice to have the planning folks from NDIT helping.”
Bell is also helping with the Love Valemount project, a pilot program started last year from NDIT, as a way to showcase and help connect locally-owned independent businesses with customers.
Bell’s internship, which started in May, can last up to a year. He recognizes it is tough for small communities to hire another employee after the internship finishes, but he does have student debts to pay off, so he’ll be looking out for options in a lot of different places.
“It’d be great to go to Haida Gwaii, explore some other parts of Northern BC,” says Bell about his future plans. “We’ll see what other opportunities are available.”