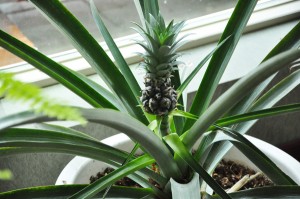 While many Canadians flock to warmer climates during the long winter, one Valemount local brought the tropics to the Valley.

“I just bought a pineapple from the store, cut the top off, let it dry overnight, and then just pressed it into the soil,” Wayne Schnell, a hobbyist gardener, told the Goat. “Some grow and some don’t.”

The plant sits in the Cranberry Lounge of the Best Western, and gets plenty of sunlight from the huge windows looking out onto Cranberry Marsh—exactly why Wayne thought the plant should be in the hotel. The plant, just under 2 years old, now has a tiny pineapple growing on it.

Over the years Wayne has planted a number of pineapples, but “this is the first one I’ve seen bloom and take off that way,” he said. Pineapples don’t need much water or soil and are one of the few tropical plants that can be grown in a pot.

Lorri Carlson bartends regularly in the Cranberry Lounge and has been taking care of the plant since Wayne brought it in at the end of last summer. “I watched that little sucker grow from this big,” she said, holding two fingers a few inches apart. “I watch it grow every day,” she laughs, “and if you look closely, you can see a second little baby pineapple plant starting to grow right beside the big one.”

Wayne never intended to grow the plant for its fruit; he’s simply a longtime gardening enthusiast. Gardening was an important hobby of his during his battle with cancer a number of years ago, a battle that he appears to have won as he’s been in remission for five years now. “I’ve always gardened. Life goes on, things grow.”

Growing pineapples might be something more Valley residents want to consider, as the pineapple industry has been mired in controversy in recent years. A study in 2010 by Consumer International and sponsored by the European Union found Canada to be the 8th largest consumer of pineapples in the world, and that most pineapples, by far, come from developing countries, notably Costa Rica, where local growing conditions are plagued by labour exploitation, poor governance and disproportionate income distribution. Large multinational traders and retailers, for example, reap 41% of the final value of pineapple exporting, while the workers receive only 4%, the study found.

It might not be practical to grow your own pineapples — it’s a 2 – 3 year commitment before fruits can be harvested — but with the thriving local farming community, there must be others in the Valley growing unusual edibles. What are they? Send us an email and pictures! [email protected]