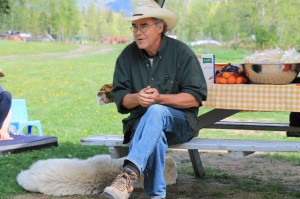 On a beautiful Sunday afternoon 28 adults and children gathered at Twin Meadows Organic Farm with the goal of starting the process of forming a Sustainable Seed Initiative specifically for the Robson Valley.

Rupert Adams from the Bauta Family Initiative, guest speaker for the afternoon, explained the necessity for controlling the historical seed stock specific to this area as a major cost savings initiative. He explained that Canada, through organisations like the USC (Unitarian Service Committee) had for years gone offshore to reach out and help others, but had not done a particularly good job of working with Canadians to protect and develop their own resources. Adams suggested that this is an area that Canada could truly excel in and from what he had seen, this valley and its unique eco climate was well suited to produce many times its local needs which could then be distributed to other residents of BC and even beyond. Originally developed by those involved in Organic Certification and Seed Savings practices the Bauta Family Initiative is continuing to be a driving force in expanding this work across BC and Canada. It will also guarantee and expand the seed collection and ‘pure’ seed (not modified or hybredized) supply for future generations. Adams and his group are in the second year of a 4-year program to extend their vision and program for the betterment of BC and Canada.

Amongst the attendees was local tomato seed saver and gardener Pete Amyoony who was clearly enthralled with the potential development into other areas. Interestingly representatives from Valemount, Dunster, McBride, Crescent Spur, Dome Creek and points in between were all present, as well as a group of four WOOFERS from Belgium who are here to work at the Kakwa Village for a few weeks. Those present though did include several newer farmers as well as people like Gary and Wendy Lowe and Pete Amyoony, representing an age spectrum which bodes well for the future sustainability of the group and initiative.

As things proceeded in the afternoon the group decided to focus initially on areas such as barley and wheat, along with annual seeds such as peas, spinach, lettuce, broad beans, regular beans, potatoes, broccoli, radish, sunflowers, broccoli, radish, garlic and of course tomatoes. They will meet on the second last Sunday of each month with the next meeting to be held at Glenda Thompson’s farm in June. For those who would like to join with this group, they could reach the Lowe’s, Thompson’s or Roth’s at their individual farms.