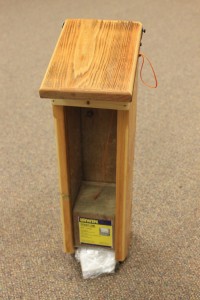 Valemount resident Peter Fox was hoping to make a presentation of his prototype PUPS (Pick-Up Poop Station) at the last Valemount Tourism committee meeting, but the meeting was postponed. Still, he was able to show the prototype – actually the second version – to a few members of the committee, and it now sits at the Village Office.

Fox is proposing a program to help people pick up after their dogs in Valemount’s public places, like the Bigfoot Trail and parks. He’s designed a system that uses recycled bread bags inserted in a wooden dispensing station that can be placed strategically around the village. The hope is that dog owners – who Fox notices often forget to bring bags – will be able to grab a bag and then dispose of it in a nearby garbage bin.

The first version of box was called DDD, for “Doggy Doo Depot,” but Fox quickly realized he needed to change the name.

Henry Unger and Wayne Brown built the prototype to Fox’s general specifications, though Fox says the mouth will have to be a bit smaller to keep the bags from falling out. The front is Plexiglas, and the cord is used to draw the wooden weight out the hinged top in order to refill the dispenser.

His idea is to have a couple central collection spots (possibly the grocery store and the high school) with a large version of the dispensing boxes to collect and recycle clean used bread bags. The bags would then be placed in dispensers around town.

Fox has designed the dispensers so that students can build the boxes in woodworking shop class, with the hope that pride and personal ownership in the program will deter potential vandalism. He says Dan Kenkel, Principal of Valemount Secondary, is on side with the plan. Potentially, Valemount Tourism could “pay” the students for the boxes, as a fundraiser, which would be added incentive for the kids to encourage people to use the dispensers to clean up after their dogs.

“The PUPS design is adaptable, to pop-up discreetly anywhere in the Village planters, in parking lots, along 5th,” says Fox. “We just need to add a Village decal/logo, and install more conveniently placed garbage bins around town.”

Fox has also noticed that people don’t tend to go more than a block or so to look for a garbage receptacle, so bear-proof garbage bins near the dispensing units are also key to his plan, and he hopes Tourism Valemount will agree to install more around town. The dispensing units could also be placed at other trails like Cranberry Marsh, and Fox says the owner of Tete Jaune Lodge has already seen the prototype and wants some for his parking area and river frontage.

Fox says we already have the legislation, and he’s been known to make a spontaneous “citizen’s arrest” for people not cleaning up after their dogs. He expects the system will go a long way in our tourist town towards providing a clean and sanitary solution for dog walkers.

Jennifer Robinson, marketing manager for Tourism Valemount says Fox was scheduled to make his presentation to the Tourism committee at their meeting on Tuesday afternoon, June 3.