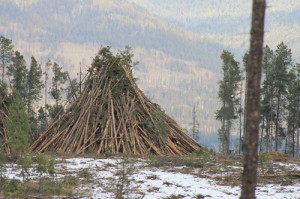 Recent logging by the Valemount Community Forest has left a few people expressing dismay on social media about the loss of “our back yards.”

Craig Pryor, Manager of Valemount Community Forest, confirmed they have been harvesting a block in the Secord Road area off Cranberry Lake Road, and says they have held a number of meetings with nearby residents to discuss how to limit the impacts.

The Goat contacted one person of the two households affected by the harvesting, but the person declined an interview.

Pryor says the stand is pure pine and has been heavily damaged by mountain pine beetle, and some of the earlier-attacked trees have started to fall down. He says the block plan he laid out included wildlife tree patches, machine-free zones around thick young pine, retention of natural regeneration, and an irregular boundary on the cut area. He says he thought the residents understood the stand was damaged, but he knew they were not happy with having a block in their backyard and didn’t agree with the action of clear cutting. 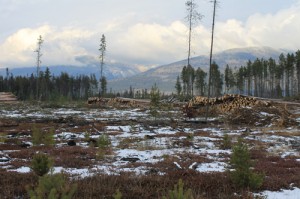 Harry Offizer, Fuel Management Specialist with the Wildfire Management Branch (FLNRO) says “That is a challenge when you are dealing with a pine forest that had been affected by mountain pine beetle, because obviously green space is a value identified by the community.”

Offizer has been involved in creating Valemount’s Community Wildfire Protection Plan. The plan, developed in 2012 with the help of provincial funding, looks at critical areas we need to protect in the event of a wildfire, and areas that can be targeted to reduce the risk.

“When Council supports the implementation of the CWPP, there are some hard decisions made,” says Offizer.

The plan itself states that the Village has limited resources and cannot implement all of the recommended actions. Even prioritized, most of the actions are at a high priority level. The Village implements the ones they can and partners with organizations like the Community Forrest. 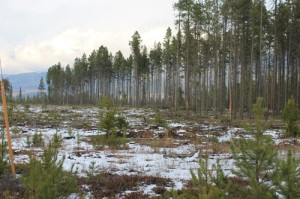 The Village has recently applied for funding for the next step in the strategic wildfire prevention process, which involves looking closely at risk areas and developing a plan for how to best deal with those specific areas. Government funding is not 100 per cent, and communities are required to invest in the projects as well, with money or in-kind donations. The area around Secord Road, between Highway 5 and Cranberry lake Road is identified as a risk area in the Village’s wildfire protection zone. However it is not on the list of areas the Village is requesting funding for. Pryor confirmed that the area was targeted for harvesting under the wildfire protection plan.

“There is a real challenge,” says Offizer. “Do we take just the dead and affected component of the stand, or do we take it all, and remove the risk.” He says if you choose to leave an area standing, and the mountain pine beetle gets into it later, your wildfire risk again increases, only now that area may not be eligible for funding, and it falls fully on the community’s shoulders.

“What the Community Forest has done in some cases – basically they have removed the risk,” says Offizer.

Pryor says he realized it is a difficult situation, and he is sympathetic to residents, but the bottom line was that the stand was heavily damaged and starting to fall down. “As the manager of the Community Forest I feel it is my job to remove dead and dying elements of the forest where appropriate and replace them with new thrifty regeneration,” he says.

The block is scheduled to be planted in the spring of 2014. Pryor says the main species planted will be pine, as the site is very sandy which rules out spruce, cedar and fir. He says he’ll probably plant some larch as well, as it seems to do well on sites like these. 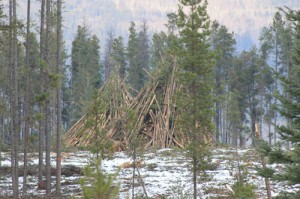