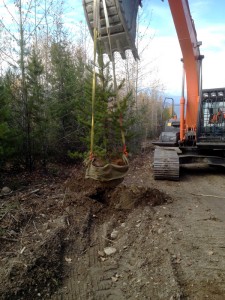 The East Canoe Forest Service Road has been closed at the 27 kilometer marker, Bulldog Bridge, since Nov. 5, until further notice.

The Ministry of Forests, Lands and Natural Resource Operations announced on Friday that the closure is due to an unsafe bridge across Bulldog Creek. The bridge was damaged last spring when a slide of rock and debris came down the creek, eroding the banks and apparently twisting the pilings.

The bridge falls under the jurisdiction of BC Timber Sales, a crown corporation. The Ministry said in the spring BC Timber Sales would construct a barricade to formally close access. In the interim, a sign and a sawhorse barricade were put in place as a warning to users.

The Ministry said about 60 kilometres of road is cut off as a result of the closure, but some of that was previously inaccessible by vehicle due to earlier damage to the road at 41 kilometer.

Frank Meersman told the Goat last spring his winter trapline, which starts around the 30 kilometer mark, would be inaccessible without the bridge, as would other traplines, outfitting and hunting opportunities, and access for ATV’s and sightseers.

The Ministry says repairs required to the damaged structure are unknown at this time and currently are being assessed. Any repair work would not occur until April or May 2014, when low water levels would allow the work to take place.