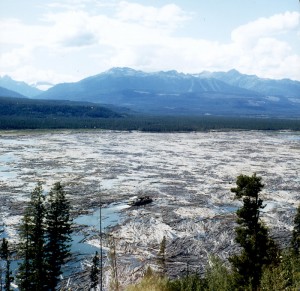 In the spring of 2012, when the provincial government started engaging the people of BC on the question of whether or not to terminate the Columbia River Treaty, one question they were asked is “What would the Columbia Basin look like if we were not constrained by the Treaty?” A year is not a very long time to try to answer such a big question, but Treaty Review team has recently released a draft copy of their results, and conferences were scheduled this week in Golden and Castlegar.

There isn’t truly a rush, since if either Canada or the US decided to terminate the treaty, 10 years notice has to be given, and the earliest that notice can be given is in September 2014. The goal of the Treaty Review is to “provide decision makers with an understanding of the range of physically possible operations” under each of three scenarios referred to as Treaty Continue, Treaty Terminate, and Treaty Plus (that last refers to additional agreements that might be reached). They want to give that information to the provincial government in the fall this year, so that the decision makers have time to consider whether to terminate the treaty, and also what might happen if the US decides to terminate. So this Technical Report looks at a broad range of social and environmental values, as well as power generation capabilities throughout the Canadian end of the Columbia system, and attempts to provide a high level overview of how the system could perform under different scenarios.

It is a lot to consider. The report is very technical, and I found it hard to read and understand. I would probably understand it better if I had gone to one of the conferences, but as it turned out, the conference scheduled for Golden was canceled, and Castlegar is a nine hour drive away. I did sign up to view the conference via web, but the conference really wasn’t designed for that. I only got to view the slides used by the presenters, sound quality was poor, and they were only able to stream one of each of the four breakout sessions. The sessions on the Kinbasket Reservoir were not streamed.

But there are definitely some interesting bits of information in the report. There is a schematic of the Columbia and Kootenay Hydroelectric Systems that I hadn’t seen before, and I think it is very helpful in understanding the flow of the systems (most maps don’t show direction of water flow, and even CBT maps that show direction are difficult to conceptualize). Of course, Valemount is not marked in this schematic, but it’s just meant to help you understand the layout of the system. You could draw Valemount on there yourself, on the edge of the big circle that represents Kinbasket Reservoir.

The Columbia system is even more complicated on the US side of the border, and there were a couple interesting facts I gleaned from the US Treaty Review section of the conference. On other river systems in the US, they have more than enough capacity to store runoff, but they don’t have nearly enough storage on the Columbia to prevent flooding, which is a major concern for them. Kinbasket is the largest reservoir in the entire system, and therefore the Treaty is very important to the US. And yet the Canadian Entitlement (the money BC gets from the US) is based purely on Downstream Power Generation. (That is because Canada got a lump sum payment for the flood control benefits for the life of the Treaty at the beginning, and that money was used to build the Treaty dams.)

One might say “Hey, Canada should end the treaty, and negotiate a better entitlement, one based on flood control as well as power generation,” but it’s not that simple. For one thing, whether the Treaty continues or not, Canada still needs to provide “Called Upon” flood control to the US. What that looks like is currently being negotiated, since Canada and the US have different views on what is required. I would imagine the reviews on both sided of the border are having some effects on that negotiation.

But also there is this: Kinbasket might be very important to the US for flood control, but it has also become very important for BC for power generation. Mica and Revelstoke Dams provide about half of BC Hydro’s capacity, and whether the Treaty continues or not, changes at Mica/Kinbasket are the most costly (since they have to be balanced by changes elsewhere, either by water levels in other areas of the Columbia or by power generation elsewhere in the province). Regarding Kinbasket Reservoir, if the Treaty continues, “changes at Mica are the most costly and provide limited gains for interests around the reservoir.” If the Treaty is terminated, “more radical changes to operations could be developed that could provide greater benefits to interests around the reservoir but at an even higher cost.” So it looks like, treaty or not, the issues for Kinbasket (recreation, environmental, economic) are going to be about trade-offs.

And actually, the report points out a lot of trade-offs throughout the Columbia Basin, regardless of the Columbia River Treaty terminating or continuing; I hope the Province will continue this sort of engagement on these issues once the Treaty Review process is complete. I asked that question in the panel discussion session. Unfortunately, I couldn’t hear the response.