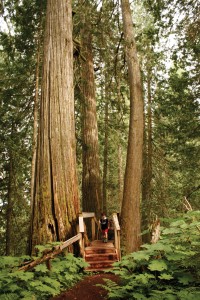 It’s a crisp autumn day and Nowell Senior is headed east on Hwy 16 from his home in Prince George. With him is a 25-year-old man who doesn’t speak and is confined to a wheelchair. Senior and his wife provide respite care to the man who lives with another family most of the time. Senior has worked with people who have special needs throughout his career at a Prince George high school and as a parent and foster parent. It was long ago that he began to look through the eyes of people with physical and mental challenges, and he has never forgotten the view. On this particular day he maneuvers the young man’s wheelchair out of the van and into the gravel parking lot just off Hwy 16, about an hour northwest of McBride. A new big sign proclaiming “Ancient Forest” now stands along the roadside. The sign was erected by the Caledonia Ramblers, the hiking club Senior is a part of. Out of the van, Senior pushes his wheelchair protégé up the slope towards the boardwalk that juts out of the forest and along the far edge of the parking area. The young man isn’t quite sure about this at first – it takes some lifting and pushing to get his chair on the boardwalk – but once he is up on the wide cedar trail he relaxes.

Many people have described the experience of being in the ancient forest as magical or spiritual. Part of it is surely the juxtaposition with the roadway. In less than a minute you can go from your vehicle, from CBC news, from the smell of old coffee and wet boots to an enchanted forest with trees older than 1000 years towering above you. You feel as if you are shrinking as you move into the forest and the trees grow taller and broader. Just the week before Senior said a man visiting from Nova Scotia with Cerebral Palsy visited the new boardwalk. He was so impressed by the trail that he volunteered to hammer some nails into the section still under construction. “Because you’re in a wheel- chair, or you have a walker or you’ve got other challenges that shouldn’t restrict you from doing what everyone else is doing,” Senior says.

They are very close to completion. It has been three years since Senior and his crew from the Caledonia Ramblers carried in the first load of timbers for the board- walk. Since then, they have carried – by hand – 55 tons of cedar planks and eaten up 4,700 volunteer hours. Senior estimates they still have 600 hours to go to add railings, reinforce the base of the trail, cement the footings and complete signage. With 9,000 visitors to the forest last year, Senior says awareness is key to ensuring the ancient forest remains a recreation site. In 2005, the Ramblers had applied to build a backcountry trail on Driscoll Ridge. Dome Creek and Crescent Spur residents learned of the hiking club’s plans to build a nature trail and they showed them what is now considered the Ancient Forest. “It was at that time that we realized the area was an approved cut block for logging,” Senior says.

The club sent in an amendment to their application to the Province to include the ancient forest as part of the nature trail. They said in the application that in the future they would sit down with the licensee to discuss alternative areas for logging. “It now has a degree of protection as an interpretive recreation site,” Senior says. The initial Ancient Forest trail was completed in 2006 with 13 interpretive signs. It was Senior’s special needs students who helped install those signs – those who didn’t have mobility issues. Opening up the forest to more people, including seniors and persons with a disability, will help ensure the value of the forest is well-known, Senior says. Sheltered from forest fires for millennia, the interior cedar-hemlock temperate rainforest is the furthest rainforest from the ocean anywhere on the planet. Even more miraculous is its location next to a major highway. 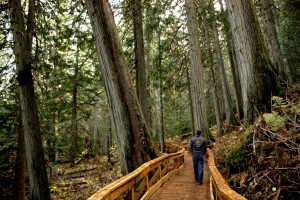 “The only thing that will kill the trees is old age,” Senior says. “They are resistant to insects, resistant to fire, and because they’ve had limited economic value it’s gone in their favour.” He says it’s not just the cedars that bring awe in the forest. “There’s worlds within worlds of tiny lichens that have taken hundreds and hundreds of years to find a host on a cedar tree they’re able to develop a relationship with that cedar – so there’s an exchange taking place between the tiniest organisms and the larger organisms and they’re supporting each other in their various ways. It’s a marvelous set of circumstances really.”

Visitors feel like they’re stepping back in time. Senior believes that if people are aware of the forest’s uniqueness, it will help preserve it for future generations.

“You can’t learn about it by watching TV or talking to people – you have to go in the forest and you have to experience it.”