A partnership between the Valemount Community Forest (VCF) and the local hiking club is opening up 6km of road and stunning mountain views to the public.

The hill – 5-Mile hill – was long-known as a fire lookout, says local hiking club YORA member Joe Nusse. The original road was pushed in with a CAT sometime around 1950, a road only good for 4x4s.

The fire tower was used for several decades and was decommissioned in the early 1990s (it now sits outside the Valemount Museum). Since that time, residents have continued to use the road for recreational pursuits, but weather and washouts have left the road in poor condition, Nusse says.

The 5-Mile Road upgrades and harvesting plans will allow tourists and locals to reach the summit’s stunning views in Honda Civics and Pintos on safer and wider roads.

Nusse says they have widened several sharp switchbacks and plan to eliminate the steepest part of the old road altogether. 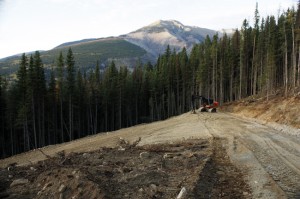 He says on the old road, several long, narrow sections were at a 20 per cent grade. The upgrades and road additions will ensure that the road is never more than a 15 per cent grade, and the steepest grades will be short.

YORA received $12,000 in 2011 from Columbia Basin Trust to improve the road. Nusse says the money was for the purpose of better access to McKirdy alpine meadows trail head as well as anticipating future bike park construction.

YORA then approached the community forest to assist with the project in terms of road permitting and certifying the route using VCF technicians. The board of the VCF agreed to partner on the project and synergize the upgrades with some of their harvest plans in the area to share the costs. The Community Forest donated what they would have spent anyway on harvesting – and used the $12,000 to do further upgrades on the road.

“What we got was a significantly higher grade road than would be needed for harvesting,” Nusse says.

Nusse says YORA also wanted to create a continuous ski-out from McKirdy cabin to Valemount – where you wouldn’t have to take your skis off once from the alpine cabin back to town. They also wanted to re-open the viewing area at the top of 5-mile which had grown in since it was used as a fire look-out, with trees now obstructing the 180 degree views.

Up to this year, the community forest has eliminated three very tight switchbacks and replaced them with one very wide corner. The road is 2-lanes wide from the bottom to ¾ of the way up, and will be widened all the way up over the next year.

The community forest added ditching, drainage control and culverts to reduce the annual washout on the old road.

The viewing area has started to be cleared on the top of 5-mile so you can see the panorama of the Premier Range. When completed sightseers will have an unobstructed view from Mica Mtn (Tete-Jaune) to Canoe Mountain. 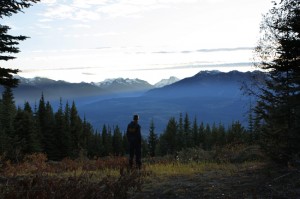 “There’s a lot of potential to develop it into a lot of bigger things,” he said. “Getting the infrastructure in place opens the door for all kinds of opportunities.”

He said the main improvement to the road is eliminating three sharp switchbacks near the top and adding a whole new section of road. They have also built several landings that can be used in future as parking lots/trailheads for the proposed bike park, for instance. The road will likely be maintained in partnership with the Ministry of Forests, YORA and the Community Forest.

Next year YORA will likely apply for more funding and hopefully partner with VCF again and complete the top ¼ of the road project, Nusse says, replacing the steepest grades and tightest corners with a wide well-flowing road to the top of 5-mile hill.

The hope is that once the road is passable for your average vehicle, it can be promoted as a family sightseeing attraction, with several good viewpoints all the way up, and several places to park and make use of trails, Nusse says.

Three established hiking trails – the Selwyn Traverse, McKirdy Meadows Alpine Trail and the Swift Creek Loop are accessed via the 5-mile road. The proposed bike park and its multi-use trails will also be located on 5-Mile Hill and make use of the road and new parking lot space.

The community forest removed several hundred stems of dangerous dead-standing pine adjacent to the old road, Nusse says. They also added 3 culverts that would not have been installed just for a harvest road, as well as some of the ditching was for long-term road instead of a one-time harvest road.

Local equipment contractors were used for the logging and road construction.

The old road will remain open for public traffic until the new road is completed.

About 7km from the highway to the top of 5-mile – spectacular view that any town would be envious of.

In the winter time YORA grooms the road as a ski run – as they have done for the last few years.

Due to recent active logging, the road is currently not passable during wet weather except in 4x4s. In dry weather, however, any vehicle can make it to the top in less than 20 minutes.