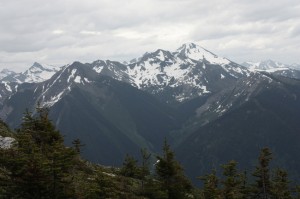 Bressette says the Community Forest does not have a fully developed watershed management plan in place due to the minor nature of the logging impact.

Block 996 is at the top of the Swift mainline at 10km, next to the Swift Creek burn area near the top of the mountain. VCF has worked with YORA to modify this road system in order to also act as improved access to the Swift Mountain hiking area. 5.7 hectares is inside the watershed boundary.

Block 1007 targets remaining pine from a previously harvested area along the Swift Mainline at 2km. It’s approximately 4 hectares in size, and within the watershed.

Block 1005 targets a strip of pine located between the Village Water Treatment Plant and the Repeater Tower with four hectares inside the watershed. Bressette says this area in particular is identified as a high priority in terms of reducing wildfire threat in the updated Community Wildfire Plan.

The fourth project is being done in conjunction with YORA, to provide improved access to 5-Mile Lookout area and McKirdy Mountain, by way of a 400m extension to the existing road, in order to eliminate 3 sharp switchbacks.

“What we’re dealing with in the short term is there are some pine patches that just sneak over the watershed boundaries, in the interest of capturing that salvage opportunity,” Bressette said, adding those patches would translate to roughly 50-60 loads of wood.

Bressette says he does not need to consult with a specialist because there is a small area of impact, not a close proximity to Swift Creek and/or tributaries, the slope and terrain associated with each area is not worrisome, and no road construction activities are proposed (with exception of the 5-Mile Extension, which is located 1 km away from Swift Creek and does not cross any tributaries).

“People are going to be concerned with any development in the community watershed so it’s important to be transparent. We need to make sure we have good balance of all the values of the area.”

“You can prescribe whatever you want in a watershed, but we don’t want to get confused here. We’re not harvesting in the watershed as a strategy, we’re just trying to capture these three pine salvage areas that are just over the edge of the boundary.”

He says those patches are in an area where there has been logging in the past by other forest companies, both in and outside the watershed. The watershed designated was put in after most of the logging was done in that area.

Nearly a quarter of the community forest land base is comprised of the watershed. Since the Community Forest received its license in 2007, it has been the only licensee that can log in that area. Bressette says generally the government tends to put more sensitive areas in the Community Forest to give local managers more control.

“Watersheds are not parks – they are part of the harvesting landbase, but they’re identified as watersheds because they need to be handled in a more sensitive way,” Bressette says.

Bressette says before any planning of harvesting takes place on a larger scale in this sensitive area, the Community Forest will want to undertake a comprehensive plan, which would include things like hydrology, landslide potential, low-impact harvesting, and environmental risk among many other factors.

The Community Forest expects to initiate the early stages of public involvement and planning exercises for development of the Swift Creek Community Watershed at some point in the next 2 – 3 years, he says. The timeframe for completion of a full watershed management plan is expected to take one to two years.

He says they plan to have the level finalized as part of new management plan put together this fall, which will also re-assess their general operations.

“This management plan will focus a lot more on the long-term approach rather than when we first got the license which faced mostly on pine,” Bressette says.

That plan will include long-term objectives and values for the community forest.

Bressette was criticized for a statement he made during the Special Committee on Timber Supply in June, referring to old-growth management. The committee is consulting with communities to see whether to increase timber volume from marginal or sensitive areas.

“What we were getting at, at the hearing, was any decisions that are made around (old growth logging) in this area, should be controlled by the community as opposed to a government coming in and saying, ‘We’re going to log old-growth areas in Valemount to support a mill in Quesnel.’”

“The context wasn’t that I was saying we should log old-growth areas.”

He says as long they are called Old-Growth Management Areas and not old-growth parks, it makes sense periodically to re-assess how they are managed.

The Community Forest is a corporation solely owned by the Village of Valemount and is currently acquiring a 5-year cushion of operating capital before paying dividends to the village. Bressette expects to hit that 5-year base by the end of the year. He says once money is available, the community forest board would recommendations on the use of the money to Village Council.

One thought on “Watershed logging for local interests: community forest”