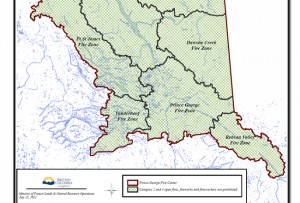 Effective at 1 p.m. on Friday, July 13, 2012, open fires and firework use will be prohibited throughout the entire Prince George Fire Centre. This prohibition is an extension of a ban that has been in place in most of the Prince George fire centre since May 19, and now includes the Fort Nelson fire zone.

This prohibition is to help prevent human-caused wildfires and protect the public. It will remain in place until Sept. 30, 2012 or until the public is otherwise notified.
Specifically, this prohibition applies to:

This prohibition does not include campfires, gas or propane cooking stoves, or briquettes. Campfires must not be larger than 0.5 metres by 0.5 metres in size. People lighting a campfire must maintain a fireguard by removing flammable debris from around the campfire area and they must have a hand tool or at least eight litres of water available nearby to properly extinguish the fire.

Do not light or keep campfires burning during windy conditions. Never leave a fire unattended. Always make sure that the fire is completely extinguished and the embers are cold before you leave the area.

This prohibition covers all BC Parks, Crown and private lands, but does not apply within the boundaries of local governments that have forest fire prevention bylaws and are serviced by a fire department. Please check with civic authorities for any prohibitions before lighting a fire.

If you contravene an open fire prohibition, you may be issued a ticket for $345 or, if convicted in court, be fined up to $100,000 and sentenced to one year in jail. Anyone who causes a wildfire through arson or recklessness can be fined up to $1 million or spend three years in prison and be held accountable for associated firefighting costs.

Crews from the Prince George Fire Centre have responded to 123 wildfires since April 1 (88 caused by humans and 33 caused by lightning), which have burned a total of 1,597 hectares.

The Prince George Fire Centre extends from the Yukon and Northwest Territories borders in the north to Tweedsmuir Provincial Park, Cottonwood River and Robson Valley in the south, and from the Alberta border in the east to the Skeena Mountains in the west.

A map of the area covered by this prohibition is available online at:http://bcwildfire.ca/ftp/!Project/WildfireNews/7112012~25242_PGFCProhibitionsJuly13.pdf