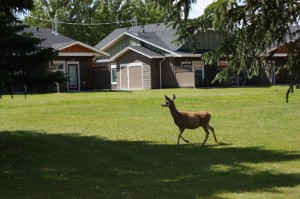 Deer munching on flower beds, attacking pets and nesting in garden patches has become a frustrating part of the McBride landscape in recent years.

In a presentation to Council last week, McBride resident Ralph Bezanson outlined his concerns about the growing population of deer in the village limits.

Bezanson says because of plentiful food sources for the deer, he has seen does with twins and triplets, a worrying sign for a population that is already too large.

“If there’s 50 deer and they multiply over a three-year term, that could become a big problem,” he says.

While the exact number of deer who call McBride home is unknown, Bezanson’s wife Edna Partridge says already they are a danger to animals and to the public.

She says most of the deer in town are does, which become aggressive when they are with their young.

“The deer are doing what’s natural, but the problem is where they’re doing it,” she says.

Partridge says she had a doe follow her down the street, and was concerned it might attack. She worries the deer will attract cougars into town, as there was already one cougar scare this winter.

But even without the danger of cougars, residents say the deer are showing aggressive behaviour. McBride resident Jenny Shawara says her Shitzu was attacked by a deer right on their doorstep. The deer broke the dog’s pelvis in two places. Luckily the dog is recovering after getting treatment by the veterinarian, but Shawara says it’s one instance of aggressive deer behaviour.

Deer have been a problem for Donna Perkins for years as they enjoy eating her shrubs.

“Because there’s no one there during the day, they are quite comfortable,” Perkins says.

She adds that there are marbles from their waste all over her backyard, which emerge when the snow melts. What’s clear to her and to others is that the village has become the deer’s permanent home.

Village Council is currently looking into how to deal with the problem and what the options may be. The matter will be considered again in light of this information at a future meeting.

Despite the complaints that came before council this week, the conservation office says it has not received any reports of aggressive deer in McBride in the past year.

Ministry spokesperson Brennan Clark says cases of aggressive or dangerous deer should be reported to the conservation officer service and cases will be dealt with on an individual basis depending on the circumstances.

He says though the province is responsible for wildlife management in B.C. and is willing to help communities manage deer and other wild animals in urban environments, it is up to individual municipalities to initiate the process.

Some communities, such as Cranbrook, Kimberley and Invermere, have opted for limited culls as a way of reducing populations to a level where non-lethal, management tools can be used more effectively.

Clark says as part of their deer management plans, communities must make full use of healthy deer carcasses resulting from these culls, for example by donating the meat to First Nations, or to local food banks or other charitable groups. He says wildlife experts advise that capturing deer in collapsible clover traps and euthanizing them with a bolt gun is the safest, most efficient and most humane method of deer control in urban areas.

One thought on “Urban deer out of hand: residents”