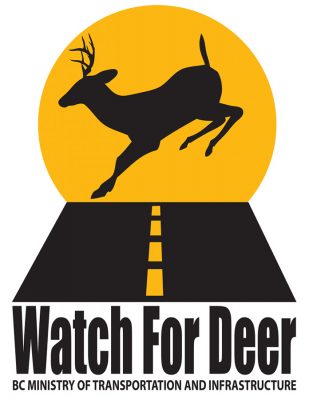 When love gets in the way, watch out. Whether taking a few does to a rendezvous point or teaching a young buck tough lessons on exactly whose genes are going to propagate this year, you sometimes forget your surroundings.

That’s why the Ministry of Transportation is warning motorists that the rut is on and deer are on the move:

“During the rut, male deer show increased interest in female deer, as well as increased aggression toward other male deer, often causing animals to move quickly with little regard for their surroundings.”

Page Norton, a local hunter said he’s seeing more activity already and the advice to drive with caution is fair.

“You can almost time species roadkill with their mating season,” said Norton. “It will be mostly deer this time of year.”

Bryan Monroe said the bucks will move the does around to keep them from the competition.

“They move them three or four at a time for a little honeymoon and they will come back and get another three or four,” he said.

“On Mountainview Road you have to be paying attention. Lots of time, the deer are preoccupied and they will scoot across at all kinds of hours. They get stupid because they are only thinking of one thing.”

Adding to the potential for a bloody hazardous mess is the poor light, since the deer are hard to see.

The Ministry of Transportation advises drivers to be vigilant during dawn and dusk when deer are most active.

If you see one deer, watch for others, as these animals seldom travel alone.

Watch for deer/elk crossing signs. These signs are placed in areas with high numbers of reported deer-vehicle incidents. Heed these warnings and adjust travelling speed accordingly.

Keep your vehicle in good shape – make sure headlights, windshields and wipers are clean and in working condition.

Use high beams at night when there are no oncoming vehicles to scan the road ahead. Honk your horn with one long blast to frighten animals away from your vehicle.