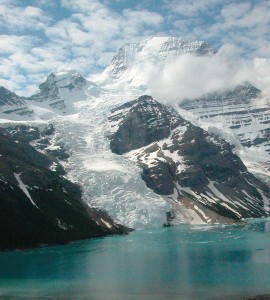 After several years of pursuit, the Yellowhead Outdoor

Recreation Association (YORA) has received $2000 in

funding from the MEC/BC Parks 100 Years of Adventure

Event Series to host a Berg Lake Marathon on the trail

rounding the back of Mount Robson.

“It is a perfect marathon length to Berg Lake and back,” says

and a one or two kilometre kids race somewhere at the bottom,”

According to Thoni, very shortly a committee will be

Both runs will take place September 10th starting at 7:30 am

for the full marathon and 8:30 am for the half-marathon.

“Apparently it is a good time because the people who do

marathons say that there is not a major marathon in this

area happening around that time. Also, the trail will not be

as busy at this time of the year.”

Thoni says that this year the race will be hosted by YORA,

of Mount Robson as the main promotional tool.

“It could be taken over by Tourism Valemount in the

“It could turn into a really big thing,” she adds.

In an e-mail, Thoni was informed that the Berg Lake

marathon event was chosen despite an overwhelming

number of competing applications under the Event Series

Anybody interested in helping organize or participating in the event is encouraged to contact Patricia
Thoni at the Caribou Grill or Jenn Meagher, marathon co-ordinator at [email protected]

The Mount Robson Marathon will include two separate events: