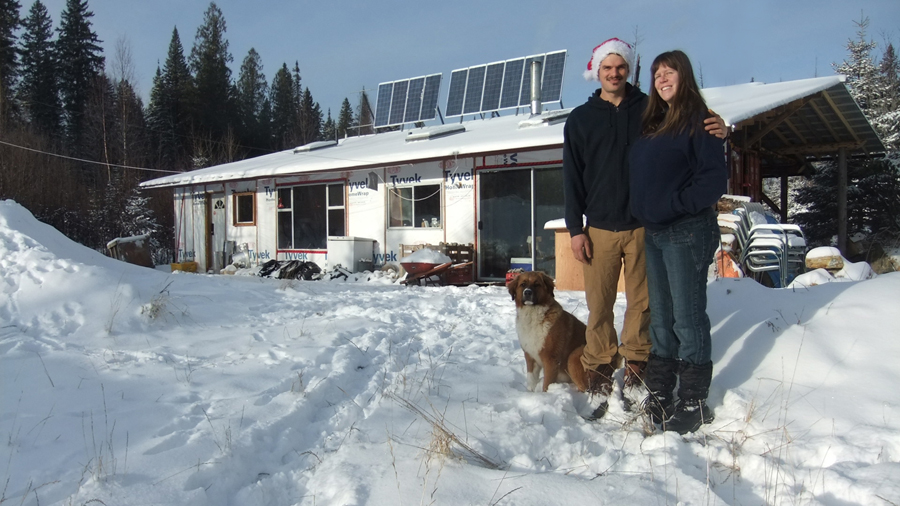 “I don’t know if you noticed. Beside us is a 40-ft shipping container.”
Steve Reid, 34, and Nikky Clarke, 31, and I are sitting at their kitchen table. The table, floor, walls, piano, and basically everything else in their home came out of that container.
This isn’t a Dr. Seuss book. And no, their house and piano aren’t the inflatable kind.
One year ago, they were a seemingly ordinary city couple living in a cramped apartment in Vancouver. But they had a secret – a shipping container stored at the Pitt Meadows Airport. Inside was their future life – 31,000 kg of it.
Basically all of it was free.
From the valueless scraps of the city they’ve built an entire life outside a small community between Prince George and Dunster. They got free windows, plywood, cupboards, even a vanity sink – all part of the urban sphere’s shedding of excess.
“There’s so much free stuff in Vancouver,” says Reid.
It started with Clarke furnishing their apartment and getting a free toaster and then posting it for sale for $10. She had been doing it for years in Vancouver. When they started looking at building materials, they thought, “Hey we can get free windows, free insulation, and free plumbing. So we just started going crazy collecting stuff,” Clarke says.
“Reid’s dad buys Sea Cans to store things in. It’s just what you do in his family,” Clarke says. “If you have extra stuff, don’t build a shed, just buy a container.”
Having been reliant on the shipping container for so long, it makes sense that it’s now a wall of their home. On the windowed side of their house, they have a fabulous view of the Robson Valley all the way to McBride. The Fraser River snakes around at the bottom of the hill.
Exactly one year ago they didn’t even have a property. They knew they were going to move in the spring – where was still uncertain.
But the couple had made leaps of faith before. They met five years ago in Thailand, after Clarke had a premonition that she would meet her husband there.
“I quit my job, sold everything and went and just sat there. It took five months, but he finally showed up,” Clarke says looking over at Reid. “We’ve been together ever since.”

They made regular trips to dump stuff in their storage container throughout the winter. Everything was okay until the Olympics began in February of last year. There were only two planes there, but the army used it as a base during that time.
“It made it kind of awkward,” Reid says, smiling.
Reid drove all over the runway, chased by security guards. They had phoned in advance, but they never got a straight answer about how to get a security pass.
Finally in April they loaded the container onto the truck. But the crane wouldn’t lift it. It was 31,000 kg and overweight.
“You want to come up here prepared right?” Clarke says. “At first I said, ‘Just pack everything. There’s tons of room.’ And in the end there was not.”
They had to take out a couch and kitchen table. It took three days to load the container onto the truck, using a forklift and a crane.

They are remote and that is exactly what they want. They are wary of the newspaper interview because they want to remain as secluded and anonymous as possible.
Clarke says she has always educated herself on potential world problems, but then Reid read a book on the future of oil and they decided they wanted to be self-sufficient.
“We’re doomsdayers,” she says. “For years we would talk about the end of oil and ruin dinner parties, just make asses of ourselves socially.”

“For years we would talk about the end of oil and ruin dinner parties, just make asses of ourselves socially.”

They used to criticise friends for eating non-organic or imported foods.
“We said such rude things to people, just like, ‘Have you even considered how your use of that affects the environment and how it’s speeding up the world’s end?’”
Where did they get all their food?
“The store.”
“We were so hypocritical,” Reid says. “But at least we had this idea that we were going to get away from it. I never wanted to be one of those people who’s all talk and never does it.”
After learning more about how our food is grown, Clarke says she couldn’t bring herself to buy any vegetables at the grocery store.
“We were just eating rice,” Clarke says. “It got out of hand. I over-educated myself.”
She says Reid always wanted to build a house and she always wanted to be a housewife.
“I just want to raise kids and bake bread,” says Clarke, who is pregnant and due in the spring.
They drove across Canada a couple of times, looking for the right property.
Clarke is from from Kimberley, B.C. and Reid is from small-town Ontario. For work, Clarke worked in call centres and Reid installed metal roofs.
“I don’t like cities,” says Reid. “I travelled the world sleeping on park benches and ditches, away from everything. Then I came to Vancouver and lived in this little apartment.”
They did a tour of B.C. in October and November 2009, and got three flat tires a row, which is how they ended up at the Ancient Forest. There they met some people who are now their neighbours.
“Everyone seemed really excited to have young folks wanting to move up, they invited us home and showed us their homesteads. We were sold.”
One year later, Reid came back and looked for property between Dunster and Prince George. Clarke hadn’t even seen the property when she called the owner to ask about a price.
When she finally went up to visit the place, it wasn’t what she expected.
“Steve was like, ‘Okay, it’s just a little ways and I’ll show you where we’re going to build our house.’”
The snow was up to their knees. They didn’t have snowshoes.
“We were totally from the city – sneakers and jeans.”
“How are you going to build a house here, Steve? You can’t even walk. I was so mad. We came all this way and there’s nothing here but bush! I can’t raise children here.”
But she trusted him. They called the owner with an offer.
It wasn’t an easy ride. They camped in their van for the first five weeks. The mud was so deep they could barely walk, nevermind build their house. And at one point, a fire got loose and almost escaped their control.
But it comes with the terrain. And this couple is clearly here to stay.

All power from solar

“We went solar because we’re idealists, but we’re also so far from the road.”
All the solar equipment is brand-new. They say it was probably about the same price as getting regular hydro but they have the additional hassle that they can’t leave in the winter because they have to keep the batteries warm by heating their house with a wood stove.
You can get dial-up Internet, but most laptops don’t have the spot for modems. They just got a phone in November. But at least they are no longer showering outside.
“We could though, it was only minus one today,” Clarke says. “If it’s not windy, that’s acceptable for us.”
Reid points out the back door. “See that piece of plywood? That’s where we shower. And see that copper container? That’s the water we collect from the rain gutters and that’s what we shower with.”
But the bathtub is almost done and hopefully only Maggy, their St. Bernard/Burnese Mountain Dog cross, will be shooed outdoors for grooming.

It’s amazing how much can change in a year

Their friends in the city often think they’re crazy. But, then again, Reid and Clarke say their friends back in Vancouver are still doing exactly the same thing they were a year ago.
“Knowing how much we’ve accomplished in just eight monhts, it makes me look back on my life and think, ‘Wow, I could have actually done stuff before this with all that time,’” Clarke says. “It makes me feel sorry for my friends and family. I can see they’re not going to do anything and they’re not happy, but they’re not gutsy enough to risk it. They think we’re crazy, but I think they’re crazy. You’re going to a job you hate everyday. You’re insane.”