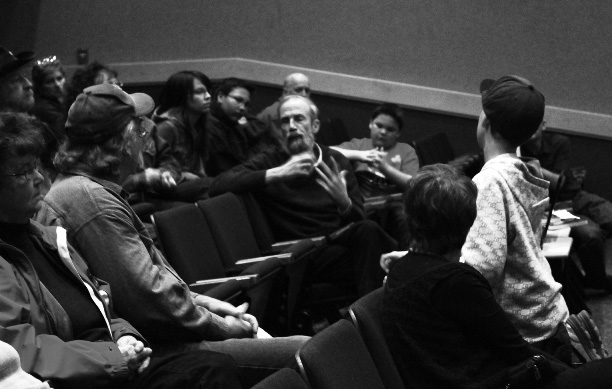 Valemount residents were treated to a unique perspective of the village and of B.C. history last week. Jay Sherwood, author and historian, presented photos and journal entries detailing northern British Columbia’s past through the eyes of Frank Swannell, one of Canada’s most famous surveyors.

Return to Northern British Columbia: A Photojournal of Frank Swannell is the third, and likely final book in Sherwood’s series. It laid the basis for his presentation at Valemount Secondary School Oct. 21, which focused on Swannell’s work from 1929 to 1939.

As part of his research, Sherwood travelled the same paths as Swannell, taking photos from the same spots as the famous surveyor.

“It’s interesting going back and seeing the areas and re-photographing,” he says.

The presentation began with an open field and a stunning mountain landscape behind it—a black and white photo of Valemount in 1936. Before the village was built up around it, the land was surveyed by Swannell and various other people.

Sherwood’s past as a surveyor, along with his interest in the outdoors and in history, inspired his interest in Frank Swannell. As a school librarian, Sherwood’s research skills came in handy. Each book took roughly three years of work in total, he says, including researching, writing and travelling all around B.C.

“I’ve had the chance to go places I would never go otherwise,” he says.

But, naturally, he couldn’t always do it alone, and for Sherwood, the biggest challenge was making connections.

For his most recent book, he was able to meet with a descendent of one of Swannell’s team members, as well as Swannell’s own grandson. Together, they travelled near the Swannell River Valley and the Ingenika River. Along the way, they found evidence of Swannell’s adventures, including surveying pins engraved with his initials.

Her family was raised on stories of the Bedaux Expedition, a journey from Edmonton to northern B.C., and other projects involving Swannell and the Blackmans, she says. “It’s been talked about always in our family,” says Courtoreille, who incidentally lives on Blackman Road.

What her family didn’t have were many of the photos and journal entries researched and collected by Sherwood.

“It’s sweet because Grandpa passed away when we were really young,” she says, “so any pictures like that are really neat.”

Sherwood says it’s difficult to find people who know about the history of northern B.C. firsthand.

For people like the Blackman family, he says, being able to connect their own stories with archived journals and photos is a lot of fun. “I made them come. They weren’t really keen on coming,” Courtoreille says of bringing her children along.

In the end, though, she says her daughter found the presentation very interesting. Several other Blackmans also attended the event.

“It was good to see our family come together.”

Sherwood will be making similar presentations around B.C. Much of the material found in his books can also be found through the Royal B.C. Museum’s archives.