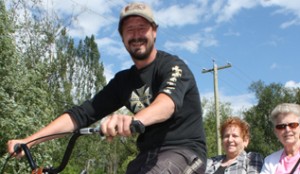 Owen Torgerson wants to know if he can save your heels for his wheels. The Valemount resident has been offering a rickshaw taxi service to callers and passersby to help fill the void for taxis in the village.

The only cab service in Valemount shut down last year. Torgerson’s company Crossroad Cycle Cab can shuttle two people anywhere in the village for $2 a block. From the Via Rail station to a hotel along highway 5, it’s about $10.

The young substitute teacher and repairman says he wants to be more than a taxi driver, and instead more of a “local concierge.”

Torgerson has been riding the bike for the past couple months to gain body strength to move the 175-pound buggy and weight of passengers. With two passengers and luggage, he says his legs are pulling close to 600 pounds.

Eventually he says he would like to give local tours, to show tourists spawning salmon or scenic spots for photo opportunities.

“Eco-friendly, low-carbon footprint tours would be fun,” he says. “And in one of the best scenery places on the planet.”

He says he may use the buggy in wintertime, but his plan is to operate the service for the warmer six months of the year.