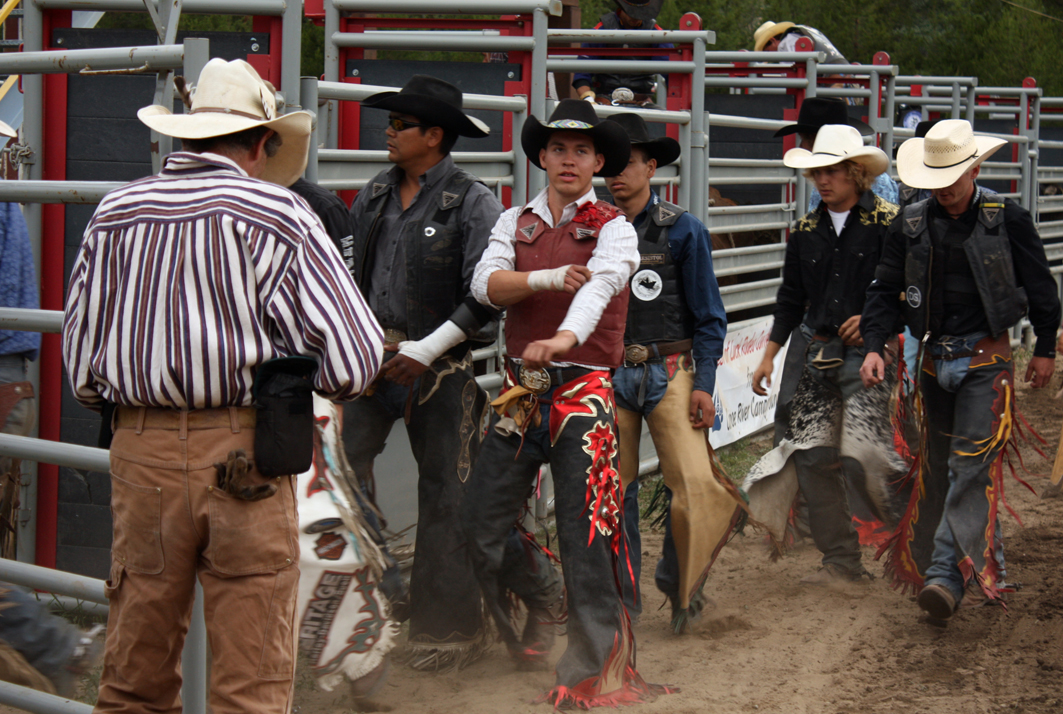 The death of a young bull rider at the Valemount rodeo grounds on Friday is re-igniting a debate about safety measures at bull riding events.

The 18-year-old bull rider, Makwala Derrickson-Hall, was wearing a vest and a helmet during his final ride, but neither prevented a fatal injury when the bull’s hind legs landed on his chest as he scrambled to get out from underneath the bucking bull.

“He fell back and I could tell he was knocked out or something,” Williams says. “I just put my hand behind his neck there and told him to breathe.”

“His cowboy buddy jumped in there and told him ‘Hang in there – keep breathing,’ cause you could see him start having a hard time to breathe.”

Williams says he has never seen someone die in the ring before, but has heard lots of stories of bulls stepping on riders’ heads or crushing their chests. A similar accident happened to his friend, but he survived.

In the ring, it’s Williams and the other bull fighters’ jobs to protect the rider from the bulls once he is bucked or dismounts. On Friday, however, there was little he could do, as Derrickson-Hall fell under the bull.

“He didn’t make a mistake, he just got thrown off and caught in a bad position,” Williams says.

When Derrickson-Hall hit the ground his helmet flew off, though it was not apparent that he sustained a head injury. As the bull spun in a circle, its hind legs struck Derrickson-Hall in the side of his vest where there is little protection, Williams says.

“The vest they got now is the best vest they got on the market,” he says of the bull riders, adding that when a 1900-pound bull steps on a rider at that angle, it can still cause a serious injury.

University of Calgary professor Dale Butterwick, who has studied rodeo injuries since the 80s, says the vast majority of bull riding accidents involve either a head injury or a thoracic compression, where bones break in the middle section of the spinal vertebrae.

While most bull riders wear vests and helmets, Butterwick says one person in North America has reportedly died every year since that time from rodeo events – over 80 per cent of the deaths in bull riding.

“How much protection does the rodeo vest provide?”

Butterwick and some colleagues created an online database in 2007 where members of the public can submit information on serious rodeo accidents.

He says he will soon be publishing a paper on their findings, and hopes to make some recommendations.

“The vast majority of fatalities that we’ve seen that have been entered into our database have involved a direct blow either to the sides, the front or the back of the thoracic cavity and the vast majority of those people had vests on,” he says. “Although it’s got lots of benefits, I don’t think the design is adequate to cope with the forces that exist in professional rodeo or amateur rodeo.”

Wearing a vest or helmet is not mandatory at World Professional Bullriding (WPB) events, which is typical of most rodeo associations, says WPB president Ty Northcott. I’s up to the rider, he says.

“I think you could have doubled the thickness of his vest and still had the same results.”

He says he has been involved in rodeo for over 40 years and he doesn’t know of any standard for safety equipment like vests.

“I haven’t picked up a vest to see if there’s a tag in it saying it’s this approved or that approved.”

He says he remembers the days when bull riders would get on with no safety gear whatsoever. He says it would be difficult to enforce safety equipment on bull riders.

The B.C. Coroners Service is continuing their investigation into Derrickson-Hall’s death, but a full report likely will not be made public for several weeks or months.

The rider who was supposed to compete after Derrickson-Hall, Canadian bull riding champion Jody Turner, dropped out of the competition after the accident. About half of the 200-some people in the stands went home before it re-started about an hour later.

Jesse Flett, a bull rider from Fort Vermillion went ahead with his ride once the ambulance left.

“It messed with my head a little bit,” said Flett, who said he knew he was dead when the ambulance left.

Michlako says dispatch times indicate it took 15 minutes for an ambulance to arrive on the scene and 30 minutes before Derrickson-Hall arrived at the health clinic in Valemount. The ambulance took one wrong turn on the way to the rodeo grounds, but was quickly re-directed, he says.

The ambulance that arrived at the rodeo was from McBride but was already stationed in Valemount near the highway, about 7 km from the rodeo grounds, in order to cover for Valemount’s two home ambulances, which had been dispatched to highway accidents.

There was no paid medical staff at the event, but three medical staff were present who had officially volunteered to be on stand-by. Paul Wildeman, the owner of Wilde Services who volunteered his rescue vehicle to the event, says calling B.C. Ambulance was better for the patient in this case.

“The response was pretty quick,” he says, adding that he called B.C. Ambulance immediately, even before he went into the ring to treat Derrickson-Hall.
“By the time our protocols were in place, B.C. ambulance was there.”

Over a dozen medical staff volunteered from the crowd. Several say Derrickson-Hall was never in stable condition, even when they evacuated him, and that he’d stopped breathing before he left the grounds. Wildeman had his private emergency transport vehicle on site, but he says the B.C. Ambulance was better equipped to deal with the situation and made the call to wait.

Corporal Ed Burstrom of the Valemount RCMP helped perform CPR on Derickson-Hall immediately after the incident. He says having B.C. ambulance on-site would not have made a difference in this case, since the injuries were so severe.

Only eight of 19 bull riders scheduled to ride showed up on Saturday. A moment of silence was held before the bullarama to commemorate the death. Some 200 people showed up to watch the bullarama the next day, where people in the stands discussed the event.

Friday and Saturday the top four bull riders split a cash prize of $4500.

The bull ridden by Derrickson-Hall was slated to buck again on Saturday, but the bull rider paired with him did not show up.

Derrickson-Hall was a member of the Okanagan First Nation and had just graduated from Mount Boucherie Senior Secondary School. His friends set up a memorial Facebook page for him. One comment reads “brother i miss you so much!!! i jus keep lookin at the door hopin and prayiing you will come home …. i love you …. ”

Another says: “Toughest kid i ever met, went out with his boots on too soon.”

Derrickson-Hall was a promising young bull-rider, qualifying for the high school rodeo finals in Wyoming and the Canadian national rodeo in Manitoba both next month.