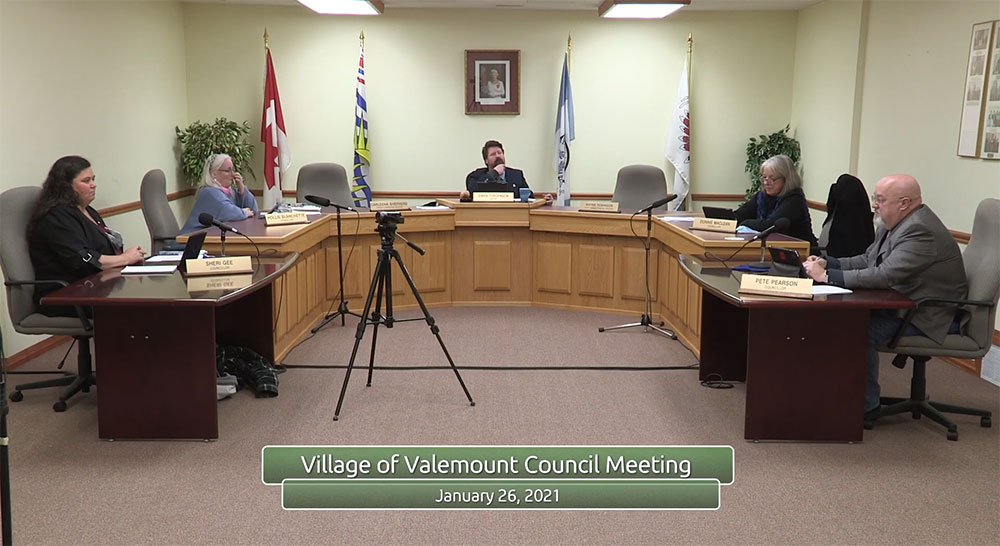 A bus to Alberta
Council’s first item was a letter from a bus company, Thompson Valley Charters seeking support for a proposed service from Kamloops to Alberta.

“It’s a great opportunity for a lot of people that need to have this service,” said Blanchette.

Gee said that it was worth noting that there is currently no passenger service to Alberta because VIA Rail isn’t running.

Priority vaccination
Council debated writing a letter to the Ministry of Health asking for the prioritization of vaccination of critical infrastructure municipal employees (ie: public works).

Councilor Pearson said he agreed with the motion but said all corners are clamouring for priority and doubted whether a letter would make the difference.

“The ability to drink clean water and flush a toilet is pretty high up on our needs of citizens,” responded Mayor Torgerson. Torgerson said that the Ministry may not have considered this.

Council decided to send a letter.

Leadership forum
Pearson asked permission to attend a leadership forum called: “Leading in Unprecedented Times: Drafting a Blueprint for the New Normal.” The forum is held virtually and the cost is $200.

Menstrual products and condoms
The council resolved to provide menstrual products and condoms free of charge in its public facilities, and also to write a letter to the provincial government calling for free universal prescription contraceptive coverage.
Pearson said he was concerned that all members of the community would have to cover the cost and proposed that a community partner cover it instead.

“As a woman I have been caught out a time or two in a public space and it can be humiliating to not have access to a simple thing such as a feminine hygiene product. It affects all women, not just those that can’t afford it,” said councillor Gee.

Blanchette said that staff should write a letter to potential partners.

Counc. Pearson said he was concerned about people freeloading.

“How do you control it? It’s not a single serve system… once people know it’s there for free and nobody is watching,” said Pearson.

MacLean said that the products are as essential as toilet paper.

Strategic Priorities Progress
In a lengthy document (available via the agenda on the Village website) CAO Robinson provided a snapshot of the village’s strategic priorities.

“This is a good visual reminder of what is being done in the other half of the building,” said Pearson.

“Council has considered the impact on the community, and feels that this proposed cannabis retail store would have an overall positive impact on residents, local businesses, Valemount’s economy, and tourism.”

Bylaw enforcement
Council received a summary report of bylaw enforcement since July 2020. There have been 55 reported infractions, most of them relate to the Animal Control Bylaw, the Good Neighbour Bylaw, and the Traffic Bylaw.
Childcare facility in proposed building

Council gave third reading to Zoning Amendment Bylaw No. 835, which will allow a childcare facility for up to 72 children below a development that includes 14 affordable housing units for women and children in need on 5th Avenue.