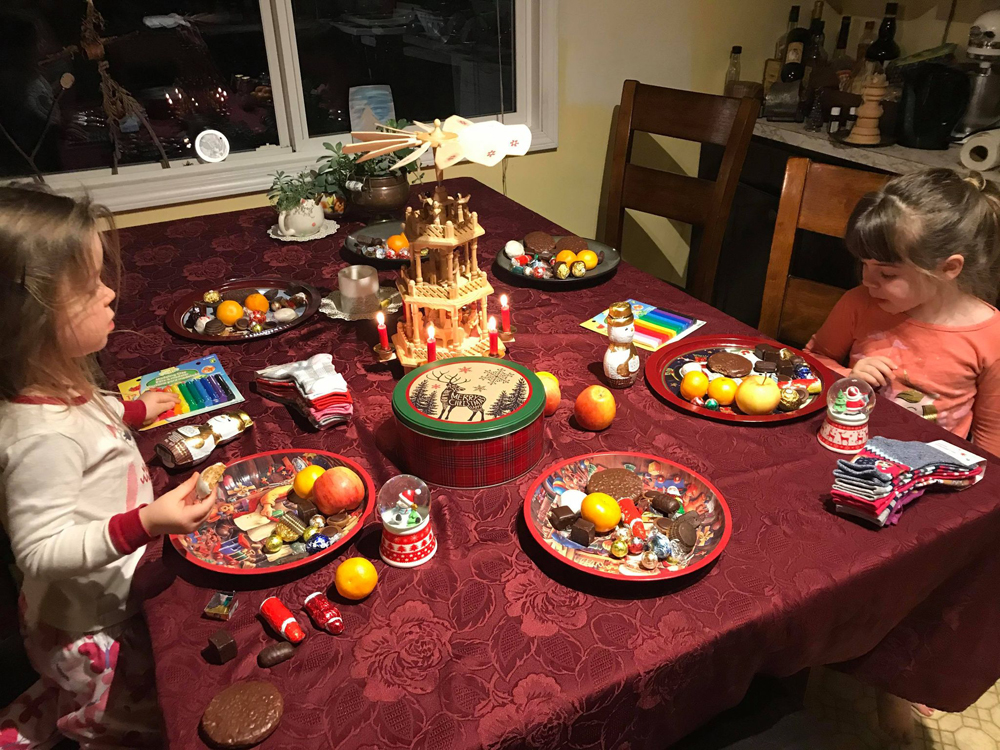 The Robson Valley is home to people from many different cultures. Most residents have either descended from or have themselves arrived from other countries. Some have held onto the holiday traditions that their families have practiced for many generations. These traditions seem to mostly be around specific types of food, or stories passed down from grandparents, but there are also some traditions that require active participation from the whole family. The Goat touched base with many families in the Valley to find out how they celebrate during the holidays. Turn the page to read about some of the traditions!

What traditions have you kept from your heritage? Write to us! [email protected]

The German culture is very serious about celebrating, and it begins before Nikolaustag on December 6. Katharina McNaughton shares a variation of the German tradition with her husband and daughters. In the weeks leading up to December 6, every other evening or so, they sing German Nikolaus and Christmas songs, as well as some in English so the girls can sing along, while gathered around a candle-lit table and Weihnachtspyramide (German Christmas Pyramid). The kids put their boots out each night hoping Nikolaus will leave them treats for the morning. 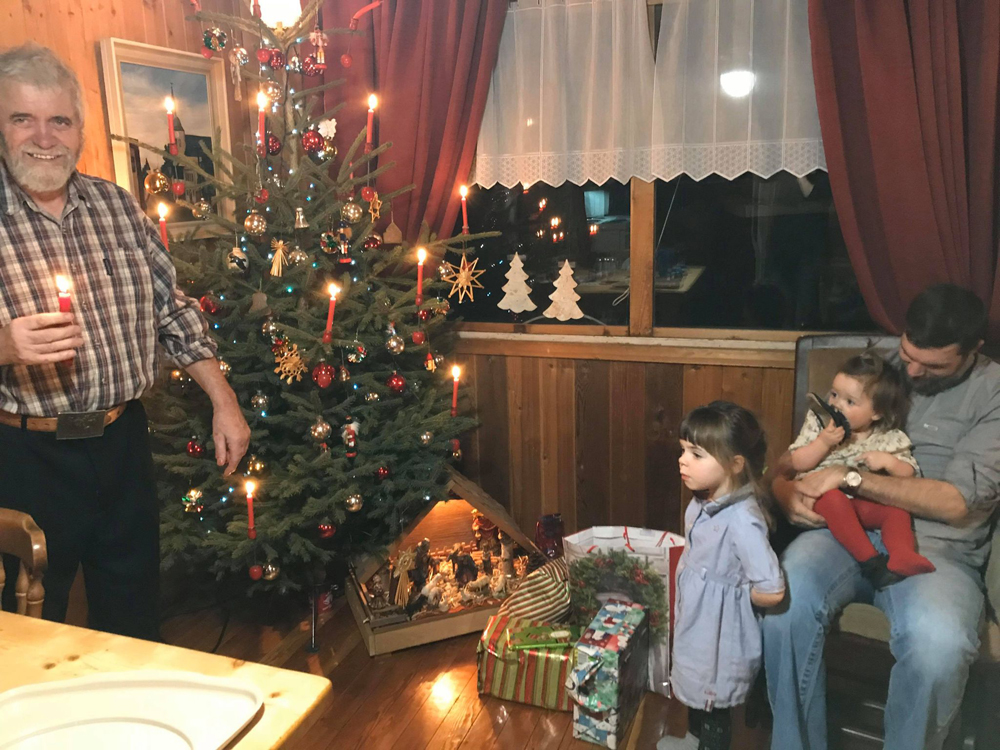 On the evening of the 5th, the family sets out Nikolaus plates at their spots around the table before bed. During the night, Nikolaus comes and decorates the table and fills the plates with German chocolates, mandarin oranges, apples and usually a pair of Christmas socks. “In the morning, the kids rush to see what Nikolaus brought,” said McNaughton. “We usually sing ‘Lasst Uns Froh Und Munter Sein’ one more time to thank Nikolaus.”
Heiligabend, or Christmas Eve is the most important day, with dinner and gift opening. The Christkind is a sprite-like child, usually depicted with blond hair and angelic wings and is the traditional Christmas gift-bringer in many parts of Europe and in parts of the Hispanic world.

“It was Christkind that brought the gifts that weren’t from family of friends,” said McNaughton. “Everyone gets dressed really nicely and we have a fancy dinner with duck, goose, roast or rabbit, red cabbage, brussel sprouts, dumplings or potatoes.”

Following dinner, the Christkind delivers the presents, while family members are in another room. The family gathers to listen to or sing Christmas songs and light the candles on the tree. McNaughton’s family still enjoys seeing the tree light up with candles as they open gifts on the 24th.

Food and drink are a big part of all the German Christmas celebrations. A spicy gluhwein (mulled wine), is enjoyed during family gatherings or after dinner as a dessert, taking the place of tea or coffee. There is a non-alcoholic version available as well, however, it is quite spicy so not many children enjoy it. “The Germans have a lot of traditional food and baking that go with Christmas,” said McNaughton.

The Tot-Bojnik family have held onto several of their Hungarian holiday traditions since arriving in Canada 10 years ago. Their Christmas tree will be decorated with Szaloncukor, a special Christmas candy. The candy, literally “parlor candy” because of where the tree was traditionally located, has a filling such as jelly, marzipan, or coconut and is covered in chocolate and wrapped in shiny coloured foil. Although the family does not make the candy,

Karolina-István Tot-Bojnik remembers making it with her grandmother once. She often makes “Bejgli,” a poppy seed and walnut roll to share with friends and neighbours, as well as a Hungarian fish soup, Halászlé, which they enjoy on Christmas Eve. The soup is made with freshwater fish and is traditionally prepared with onions and red paprika over an open fire.

Before moving to Canada 15 years ago, the Antypov family celebrated Ukranian Christmas on the 7th of January. This was a huge event where families would, among other events, partake in 12 traditional meals, and go Koliadky (caroling).

Since moving, the family has adapted to many of the customs here in Canada, including moving the day of celebration to December 25. However, they still sometimes prepare one of the 12 traditional meals, Kutya, a sweet wheat berry pudding. They also enjoy Holubtsi (cabbage rolls).

Andriy remembers that when families went singing on January 7, they would throw handfuls of seeds, wheat or barley into the homes they were visiting. It was meant to bestow a blessing and wishes for riches on the residents.

“And when we were done,” said Antypov, “they could use it for the Kutya.”

As in many European cultures, the biggest celebration for the Italians is Christmas Eve. During this meal, both the Vizza and the Barone families would not have any meat on the table. The meal historically named “the Feast of the Seven Fishes,” serves an abundance of fish and other seafood to reflect the abstinence from meat until Christmas Day. The table is set with a minimum of nine dishes.

Some of the dishes prepared for the Vizzas table include the traditional Baccala (salted cod), as well as pasta with anchovies and garlic. “Or for those of us who don’t like anchovies, olive oil and garlic,” said Olivia Vizza.

Fran Barone Chiupka remembers similar meals. Her father wanted to uphold the tradition of leaving all the leftovers on the table overnight. His family had done so, so that there would be food out when the Baby Jesus arrived, or any other midnight guests. Her mother, who was raised in a Portuguese home would have none of it. They went to bed with a clear table. “We leave a plate out,” said Vizza. “We clear the rest of the table.”

They also travelled to other homes to visit extended family. Chiupka is saddened that, as the number of family members in the valley have dwindled, this part of the tradition has ceased.

Both families had the tradition of attending midnight mass on Christmas Eve. In more recent years the service has moved to Christmas morning.

January 6, the morning of the Epiphany (the day the Italians believe the Wise Men found the manger), marks the end of the Christmas season. It is on the evening of the 5th, that Befana, an old woman, delivers small gifts to children throughout Italy. The legend goes that the Wise men were hosted in the home of LaBefana, and invited her to join them on their quest. She declined but then changed her mind and hurried after them to no avail. She continues to search homes for the Child, leaving goodies for the good children and coal for the bad.

Vizza, is passing this story down to her grandchildren through a children’s book, gifted to each of them. Also, on January 6, her tree comes down.