By Bob Covey | The Jasper Local 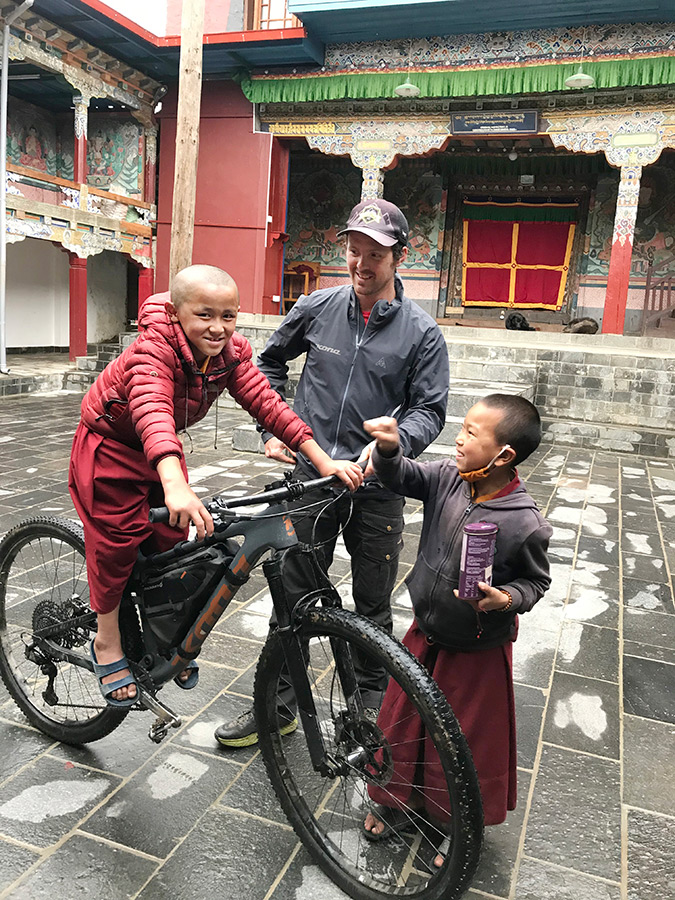 Cory Wallace is back in Canada, out of quarantine and riding his bike.
The 36-year-old world champion mountain biker calls the Rockies of Jasper National Park and McBride home, but for the past six months Wallace was living in COVID lockdown amongst different mountain peaks: the Himalayas of Nepal.

And while being stuck, indefinitely, in a crowded, developing country where the government’s response to the pandemic has varied from cavalier to militaristic might seem less-than-ideal, Wallace, ever the marathon man, didn’t just survive‚ he thrived.

“That time spent in the mountains was the most refreshing thing I’ve ever lived through,” Wallace said from his dad’s ranch near McBride, where he just emerged from two weeks in quarantine. “It was like going to the backcountry for a month.”

It didn’t start out quite so relaxed. Like many Canadians abroad in early 2020, Wallace was following the news with increasing concern as the COVID-19 pandemic swept across Asia, shutting down borders and cancelling flights in its wake. Wallace was nursing a shoulder injury in Solukhumbu, the remote part of the country home to Mount Everest, and was taking a break from the bike when PM Justin Trudeau called Canadians home March 18. Wallace was torn as to whether he should stay and risk indeterminate delay in an unpredictable country, or cast off into a stormy sea of crowded, panicked airports and gamble that he wouldn’t be exposed to the disease and bring it back to his aging parents.

“It was a tough call,” he said. “Those were definitely the hardest days of the whole ordeal.”

In the end, he stayed. For the first six weeks, Wallace roomed with another ex-pat who had also heeded the call of the mountains rather than that of his prime minister. But the accommodations were only temporary, and when Wallace was faced with the prospect of having to move to Kathmandu, where he’d be holed up in a hot, tiny flophouse in the notoriously polluted city of a million and a half people, he knew he had to find a better solution.

“Being stuck in Kathmandu was not the place to be,” he said.

Instead, he had a different place in mind.

High above his temporary crash pad was a monastery, where a community of Buddhist monks lived. Wallace had been there before on training rides (the monastery was 1,100m above his temporary accommodations) and he thought he had made a good first impression on the small community. His instinct was correct. When he asked, with the help of his Nepali friend, if he could stay, the head Lama said yes.

Walled in by mountains and with a beautifully simple daily routine, Wallace quickly got used to his new monastic lifestyle. At 6 a.m., the monks would start their day with a chant. Tea was served at 7, after which Wallace would go out on a ride. The afternoon he’d spend either with the monks, working on his computer or studying Nepalese. Once a day he could use the kitchen to make eggs—a needed protein boost for keeping muscle on—but otherwise he was living on a basic diet of potatoes, wheat balls, lentils and beans. He wasn’t wearing saffron robes and he didn’t shave his head, but living like a monk suited the 24 Hour Solo Mountain Bike World Champion just fine.

“When you’re a bike racer you’re pretty much a monk anyway,” he laughed.

Eventually, however, the life in the clouds had to come to an end and in June, Wallace understood, along with the rest of the world, that COVID-19 wasn’t going anywhere and he ought to book his flight back to Canada.

If it were only that simple. First he had to bike to Kathmandu, which meant being authorized by the police to clear various checkpoints from the monastery to the city, 240 km away. That didn’t always go as planned, and after getting turned around multiple times by officials who didn’t recognize his permits, he eventually made it to the city’s outskirts, where he holed up and sought out travel agents. That endeavour came with its own set of issues, and by the time he realized these agents didn’t have his best interests in mind, he had four different flights cancelled on him and his visa was in danger of expiring.

“I had to start looking for my own way out,” he said.

In the meantime, Wallace made the most of his situation. When he arrived, the city of Kathmandu had never looked so beautiful, he said—for once there was no traffic, no pollution and no tourists. The mountain biking around the outer rim of the city was spectacular, and to show his gratitude for the hospitality,

Wallace organized several endurance-biking fundraisers, whose donations went to his host monastery and to feeding the poor.

“It was good to have a few projects during the lockdown,” he said.

And make no mistake, it was a lockdown. While the Nepali authorities were originally rather laissez faire in their COVID-19 response, in August they instituted a strict curfew, wherein police could detain anyone they found outside in public after the morning’s essential services closed. It was temporary, but the police had broad powers, including the government’s support to use force. The crackdown was enough for Wallace to make haste to book his flights, and when he learned that airlines were once again flying out of Kathmandu, he didn’t hesitate.

“I had mixed feelings leaving, for sure,” he said. “But driving up the Icefields Parkway on a beautiful fall day was like a dream.”

Today, Wallace, whose mountain bike racing lifestyle would be considered unique by any measure, looks back on the entire experience as though it was a dream. Living at the monastery, spending time with the young monks, biking around the Himalayas while the entire world was at a standstill and breathing in clean Kathmandu air, the likes of which the city’s residents had not inhaled in decades, are things he’ll never forget.

A year ago, Nepal was promoting its 2020 tourism season with the slogan ‘A lifetime of experiences.’

“They delivered on that one for sure,” Wallace said.