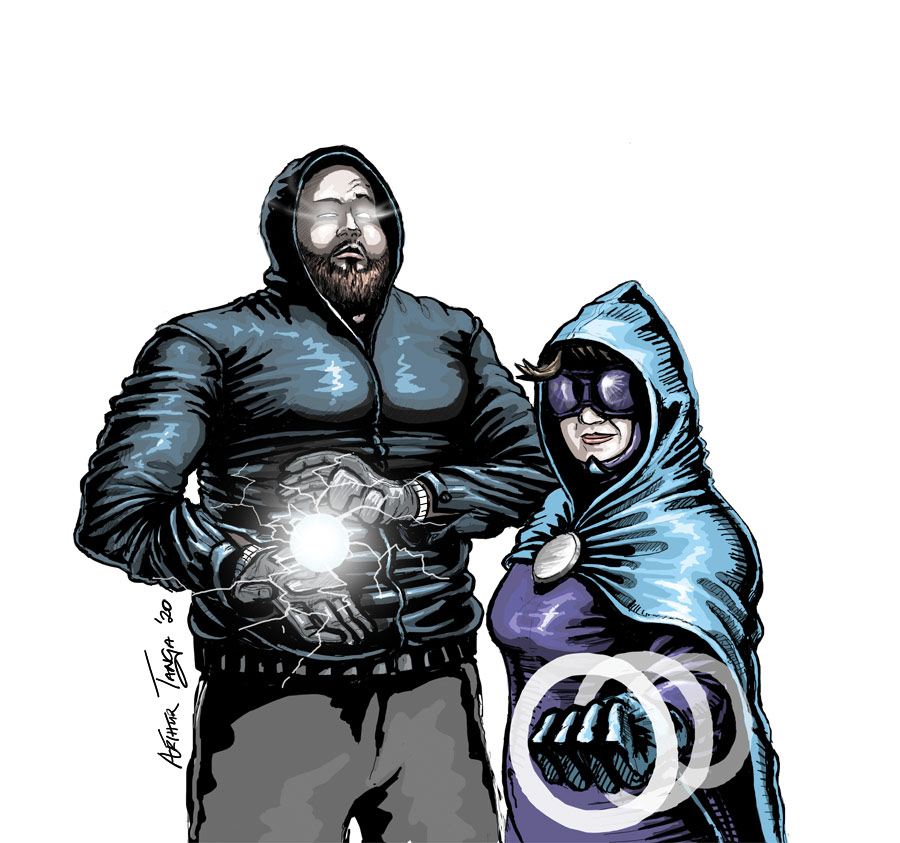 Trevor Pott and his wife Katherine Gorham are relatively recent arrivals to McBride and the two motivated self-employed Edmonton refugees are making waves in the community.
It wasn’t too long after he arrived when Pott was accused of being a super-villain, a charge leveled due to the quality of his home security system. Since then, he’s dubbed their McBride home ‘mountain lair.’

Pott explained to the Goat his desire to move to a small place.

“In tech, a lot of nerds live on the autism side of the serotonin spectrum,” said Pott. “They have ADD, OCD, Aspergers… Most nerds don’t do well with large amounts of sensory stimulus. We especially don’t do well in traffic.”

The nerd exodus is well documented.

“Nerds who have the ability to break free, they do remote work, and they move. In the US you see a huge phenomenon of nerds moving out of Silicon Valley into [remote communities].”

So far his experiments in sensory deprivation are working.

“I’m able to do two or three times the amount of writing I could do in the city,” he said.

Starlink and the nerd advance
Pott believes more nerds will come because of internet from above.

“I don’t think people remotely understand how much StarLink is going to change things.”

“If you live in Crescent Spur, your internet speed is the square root of negative goats,” he said. “But as soon as Starlink is available, living in the middle of nowhere, entirely off the grid you will get internet speeds as good as the fastest cable modem in the biggest city.”

He wonders what that will do for real estate prices in the middle of nowhere. He envisions nerds moving to remote cabins, avoiding the hustle and bustle of the city.

“In my world it is a common dream,” he said.

Kat, she can see people
Gorham seems more like an affable superhero than supervillain, likely because she grew up in Winfield, Alberta. Like McBride it was a booming logging town in the 1940s, but by the time she arrived in the 80s it was more of a used-to-be resource extraction town.

“The vibe is similar,” she said.

So far, she isn’t missing the big smoke of the metropolis.

“I was never a huge fan of the city,” she said.

Since she’s been in smallville, Gorham said she’s been developing her human to human social networking skills.

“Finding out anything about anything is hilariously indirect,” said Gorham. “If you want someone to fix an engine you may ask 6 or 7 people, often getting contradictory information.”

She is even getting used to using obsolete technologies to gather information where necessary: a phone book.

“I haven’t actually needed one for 15 years,” she said.

Gorham said she notices how people’s lives are more entwined.

“In the city, everybody is a little isolated,” she said. “Here, you know your neighbours better.”

Gorham is intrigued by folks living beyond village limits.

“When you go out into the hills, it’s a bit like you are time travelling,” said Gorham. “They aren’t living like that because they are poor, but because they don’t like to be bothered … out in the bush, near a mostly dead resource town.”

When grilled on her superpowers, Gorham admitted to having skills in research. She also claims to have a not so spooky power of being able to ‘see people’ (not dead people).

Pott’s most obvious strength is handling information. He is a man of words. Many words. In the spectrum that puts him closer to supervillain.

He claims his superpower is telling the truth and it’s part of his brand in his day job as a technology journalist.

“My job is to uncover and explain the truth. When I started to do tech marketing, that reputation got me jobs. If I have a complicated product I need to explain it in a simple fashion. I explicitly refuse to lie or exaggerate,” he said.

“My job is to convince people why you need these products: I am the cyber security equivalent of someone trying to convince doctors to wash their hands.”

Words come easily to him.

A social media thread about the legality of using home surveillance equipment ballooned to more than 2500 words, mostly written by Pott.

The couple initially had hoped to move to Port Alberni or Comox, but in light of a soft real estate market in Edmonton and a hot market on the island it just wasn’t possible.

The beauty of the mountains, coniferous forests and humidity made McBride a good alternative.

“Anywhere else within reach was dry and dessicated and miserable too,” he said.

“This was one of the very few places with pretty mountains, trees, inexpensive real estate, and almost barely usable internet.”

Pott lashed two Telus lines together to get the speed they need to do their work.

Pott said he fled Alberta’s new conservative government. The city of Edmonton had been a bastion of liberalism, but he saw the character of the city change after Fort McMurray burned down.

“I watched the whole city become more prejudiced and more angry,” he said.

Whether superheroes or villains, Pott and Gorham seem nice – at least on the outside.

“I believe strongly if you can help you must. It’s a moral imperative,” said Pott. “Admittedly I do regularly have to come to terms with this: you cannot help people who do not want to be helped.”