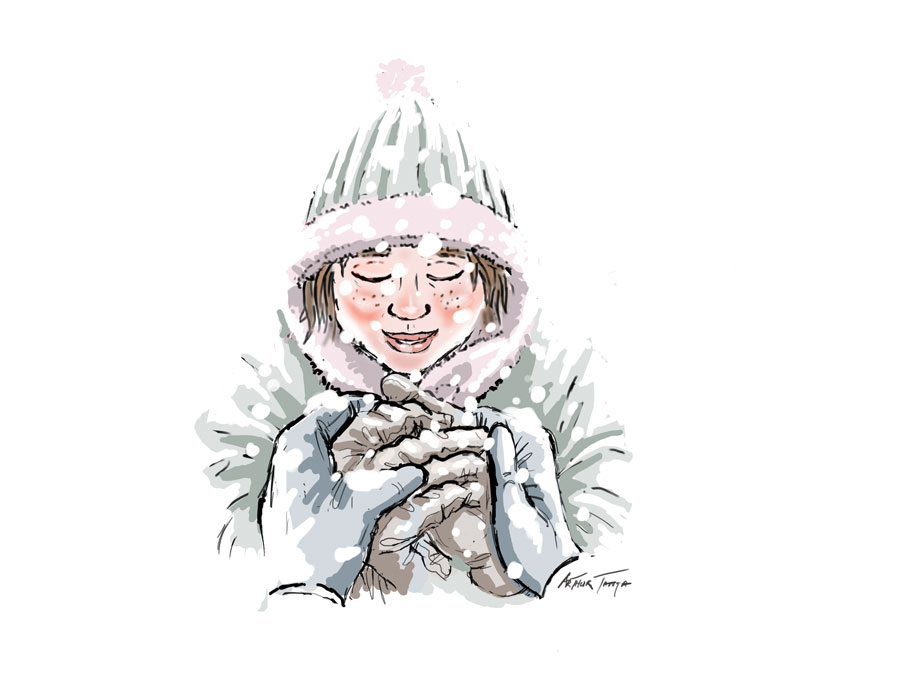 This morning as dad was preparing to leave the house for his daily chore, I asked if I could join him. “Most certainly,” was his reply. “But make sure you dress warm, it’s mighty cold out there!” I agreed and was very excited to be able to accompany him. As this involved starting the International, also known to us as the old corn binder, which dad had already been prepping by putting a pan of hot embers under the motor, which was wrapped with a large canvas to keep the heat in and later to try and start it. As he left the house I continued dressing. With my tights, undershirt, warm sweater and pants already on I decided to put on an extra pair of pants and socks just for safe measure. Next my warm coat, scarf, toque, boots and mittens, I was now ready for a little adventure.

Our cows were wintering at the west farm which was about five miles from home. As I heard the truck start, I knew it would be a few minutes before he got the tarp put away and for the truck to warm up. He returned to the house with ash pan in hand and announced to Mom that we should be back for lunch and not to worry. I scurried on behind him excited to tag along. I knew what was in store for me at the other end: I got to go for a sleigh ride! Not thinking that once we were out of the truck there was no heat whatsoever until dad had the fire lit in the old shack. But even then there was not much heat as everything was so cold. As he got the fire going I went out to get a pail of snow to put on the stove to melt. Stoking the fire up well out to the little barn we went to harness up the horses. He usually always fed his horses before putting them to work, but today they were only able to eat while he harnesses them. They would have plenty of time to eat when their job was done.

Once the horses were harnessed and hooked to the sleigh off to the field, we went to get a load of hay from the stacks that had been left there after haying was done. These stacks had been formed during the summer by dad and us kids. Already I was getting cold so dad suggested I run behind a bit. The horses trudged through the deep snow and I tried running in the tracks, with a lot of difficulty. We finally arrived and dad pulled up close to the stack as possible, only having one fork to handle the hay he suggested I trample the hay as he forked it onto the sleigh. This in turn helped to warm me up somewhat. As our load was completed, I decided to again run behind the sleigh until I was too tired. Calling out, “daaaad!” He stopped the team and tied the reins to the post, walked in the loose hay to the back of the load, knelt down and with an outreached hand called out, “Over here, Grace!”

Noticing him, I stretched out my arm, he reached it and pulled me up onto the load. I followed him to the front where he motioned me to sit right next to him, in the coziness of the hay and the sweet smell of alfalfa. Dad removed his mittens, which were thick wool mitts, inside of leather ones, and he suggested we exchange mittens. What a magical moment as I slipped my cold hands into these huge mitts that contained so much heat. The magnitude of it didn’t only warm my hands it also warmed the rest of my body, and especially my heart. As we sat next to each other on this large load of hay, the horses trudging through the snow, their harnesses rattling, the sleigh runners squeaking on the crisp snow and noticing how beautiful the glittering blanket of snow appeared in the sunlight, all I felt was sheer happiness and joy for having the opportunity to spend quality time with my dad.

Once we arrived to the yard we again exchanged mittens and seeing the smoke billowing from the chimney, I knew the snow would have melted and I’d have hot water to make myself a hot cup of chicken in a mug to warm my insides while dad finished up with the chores.